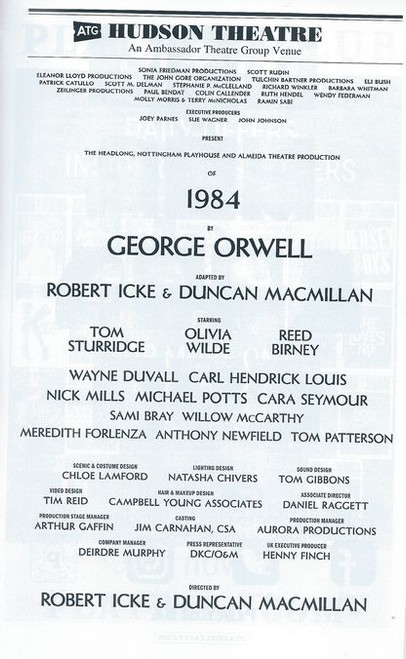 1984 is a 2013 play by Robert Icke and Duncan Macmillan based on the novel Nineteen Eighty-Four by George Orwell.

The production premiered at the Nottingham Playhouse on Friday 13 September 2013 in a co-production with the Almeida Theatre and Headlong. It was created and directed by Robert Icke and Duncan Macmillan, designed by Chloe Lamford, lighting was designed by Natasha Chivers, sound by Tom Gibbons, and video by Tim Reid. Following a UK tour, the production transferred to the Almeida Theatre in Islington from 8 February to 29 March 2014 where it later transferred into London's West End to the Playhouse Theatre from 28 April to 23 August 2014 where it was co-produced by Sonia Friedman Productions.