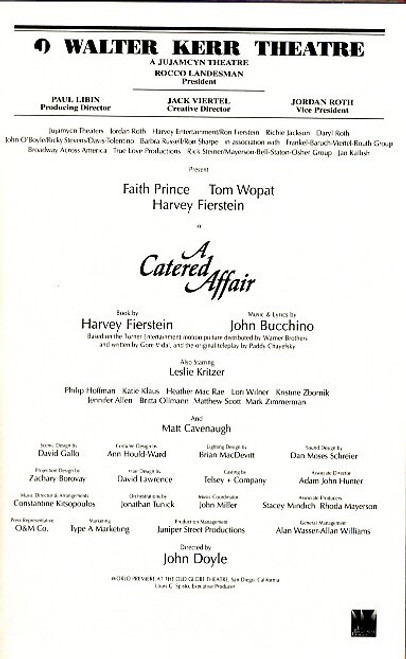 A Catered Affair is a musical with a book by Harvey Fierstein and music and lyrics by John Bucchino. It is based on both the 1956 film The Catered Affair written by Gore Vidal and the original 1955 teleplay by Paddy Chayefsky, set in 1953 in the Bronx. This is the first of Bucchino's scores produced on Broadway. The show premiered on September 20, 2007 at San Diego's Old Globe Theatre in tryouts, with the official opening on September 30, running through November 11. It began previews on Broadway at the Walter Kerr Theatre on March 25, 2008 and opened officially on April 17.The production closed on July 27, 2008 after 116 performances and 27 previews. John Doyle directed the production, which stars Fierstein, Faith Prince and Tom Wopat. This production received 12 Drama Desk Award nominations, the most of any show from the 2007-2008 season.