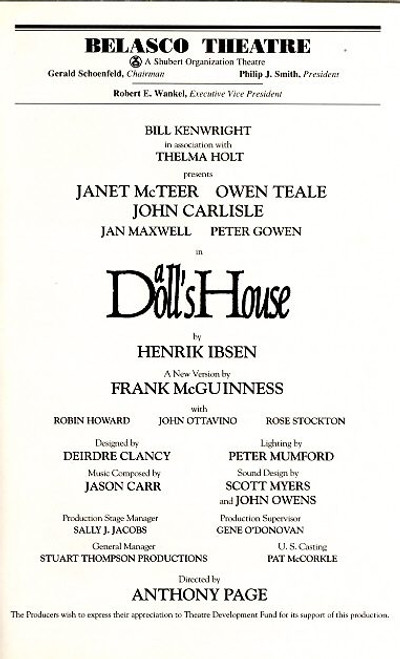 A Doll's House (Norwegian: Et dukkehjem; also translated as A Doll House) is a three-act play in prose by the Norwegian playwright Henrik Ibsen. It premièred at the Royal Theatre in Copenhagen, Denmark, on 21 December 1879, having been published earlier that month. The play was controversial when first published, as it is sharply critical of 19th century marriage norms. Michael Meyer argues that the play's theme is not women's rights, but rather "the need of every individual to find out the kind of person he or she really is and to strive to become that person." In a speech given to the Norwegian Women's Rights League in 1898, Ibsen insisted that he "must disclaim the honor of having consciously worked for the women's rights movement," since he wrote "without any conscious thought of making propaganda," his task having been "the description of humanity." The Swedish playwright August Strindberg attacked the play in his volume of short stories Getting Married (1884). A Doll's House (Jul 1997) Janet McTeer, Owen Teale, John Carlisle, Jan Maxwell, Peter Gowen - Belasco Theatre.