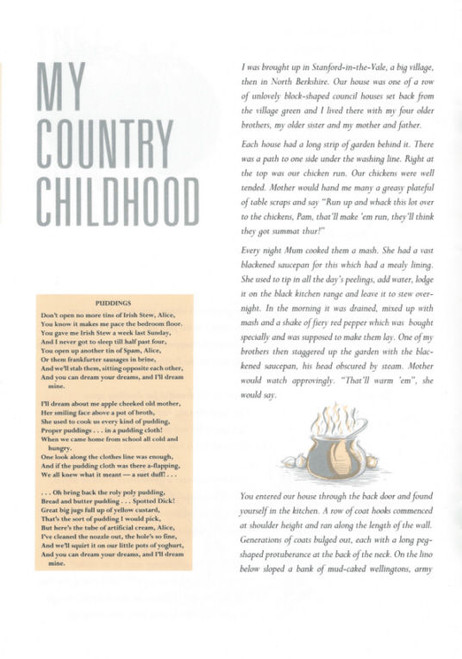 Pam Ayres MBE (born 14 March 1947) is an English poet, comedian, songwriter and presenter of radio and television programmes. Her 1975 appearance on the television talent show Opportunity Knocks led to a variety of appearances on TV and radio shows, a one-woman touring stage show and performing before the Queen.

In 1975 Ayres appeared on the television talent show Opportunity Knocks. This led to a wide variety of guest appearances on TV and radio shows. Since then she has published six books of poems, toured in a one woman stage show, hosted her own TV show and performed her stage show for the Queen.

Ayres continues to actively perform her work, the humorous quality of which is enhanced by her idiosyncratic delivery and by her distinctive accent from the Vale of the White Horse in Berkshire. Starting in September 2006 to coincide with the release of her latest book and audio CD, Ayres gave dozens of performances in various locations in the United Kingdom and Australia, with additional dates scheduled for the UK and New Zealand in 2007.

From 1996, Ayres has appeared frequently on BBC Radio: from 1996 until 1999 Ayres presented a two-hour music and chat show every Sunday afternoon on BBC Radio 2; this was followed by two series of Pam Ayres’ Open Road, in which she visited various parts of the United Kingdom, interviewing people with interesting stories to tell about their lives and local areas. More recently Ayres has become a regular contributor to BBC Radio 4, appearing in programmes such as Just a Minute, Say The Word, That Reminds Me, and two series of her own show, Ayres On The Air, a radio show of her poetry and sketches