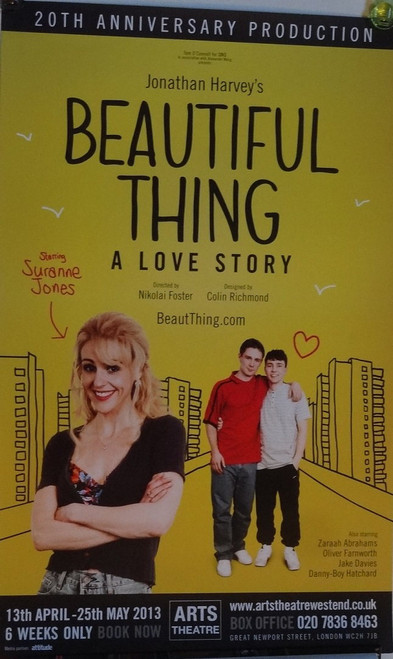 Originally Beautiful Thing is a play written by Jonathan Harvey and first performed in 1993. A screen adaptation of the play was released in 1996 by Channel 4 Films, with a revised screenplay also by Harvey. Initially, the film was only intended for television broadcast but it was so well-received that it was released in cinemas. Nikolai Foster’s celebrated anniversary production of Jonathan Harvey’s modern classic Beautiful Thing returns to the Arts Theatre to make audiences laugh and cry in equal measure one final time.

Multi-award winning actress Charlie Brooks, (best known as ‘Janine Butcher’ in EastEnders), will lead the cast as Sandra, Thomas Law (EastEnders, The World’s End) will star as Ste, Sam Jackson (Skins, Kes) will star as Jamie, Gerard McCarthy (Hollyoaks, The Fall) will star as Tony and Vanessa Babirye (Our Girl) will star as Leah.Beautiful Thing is a glorious urban love story between two young men set on an inner city housing estate. It tells the story of teenager Jamie’s relationship with classmate and neighbour, Ste. Together the two boys find comedy, warmth and the music of Mama Cass through their loud-mouthed next door neighbour, Leah, along with Jamie's mum, Sandra (the local barmaid) and her neo-hippy boyfriend, Tony.