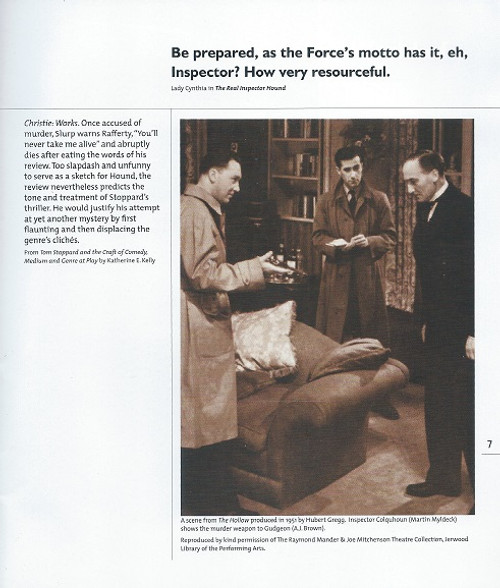 Black Comedy is a one-act farce by Peter Shaffer, first performed in 1965.

The play is written to be staged under a reversed lighting scheme: the play opens on a darkened stage. A few minutes into the show there is a short circuit, and the stage is illuminated to reveal the characters in a "blackout." On the few occasions when matches, lighters, or torches are lit, the lights grow dimmer. The title of the play is a pun.
Brindsley Miller, a young sculptor, and his debutante fiancée Carol Melkett have borrowed some expensive, antique furniture from his neighbor Harold's flat without his permission in order to impress an elderly millionaire art collector coming to view Brindsley's work, and Carol's father Colonel Melkett. When the power fails, Harold returns early, and Brindsley's ex-mistress Clea shows up unexpectedly, things slide into disaster for him.

The Real Inspector Hound is a short, one-act play by Tom Stoppard. The plot follows two theatre critics named Moon and Birdboot who are watching a ludicrous setup of a country house murder mystery, in the style of a whodunit. By chance, they become involved in the action causing a series of events that parallel the play they are watching.
The play was written between 1961 and 1962, drawing on Stoppard's experiences as a Bristol theatre critic. It was initially named The Stand-ins and later, The Critics. It is a parody of the stereotypical parlor mystery in the style of Agatha Christie's The Mousetrap, as well as of the critics watching the play, with their personal desires and obsessions interwoven into their bombastic and pompous reviews. The title is a direct reference to the ending of The Mousetrap, a play well known for guarding the secrecy of its twist ending, although the producers of Agatha Christie's play could not publicly object without drawing even more attention to the fact

This Souvenir Program is from the 2004 Queensland Theatre Company

Size 170 x 200 mm  Pictures and information of the cast and show.
Condition: Used Good 8/10
(Please Note scans are low res for fast loading)
Each Order will incur a $5.00 handling fee (including free shipping)
All Prices Shown are in USD (United States of America Dollars)
All Payments by Paypal Just Checkout as GUEST no need to register