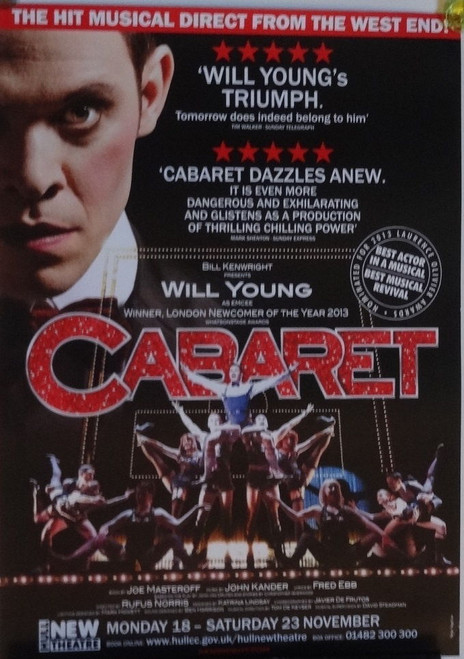 Starring Will Young as Emcee

Cabaret is a 1966 musical with music by John Kander, lyrics by Fred Ebb, and book by Joe Masteroff, based on John Van Druten's 1951 play I Am a Camera, which was adapted from the short novel Goodbye to Berlin (1939) by Christopher Isherwood. Set in 1931 Berlin as the Nazis are rising to power, it focuses on the nightlife at the seedy Kit Kat Klub, and revolves around young American writer Cliff Bradshaw and his relationship with English cabaret performer Sally Bowles. A sub-plot involves the doomed romance between German boarding house owner Fräulein Schneider and her elderly suitor Herr Schultz, a Jewish fruit vendor. Overseeing the action is the Master of Ceremonies at the Kit Kat Klub. The club serves as a metaphor for ominous political developments in late Weimar Germany.

A revival opened in the West End at the Savoy Theatre on October 3, 2012, following a four-week tour of the UK, including Bromley, Southampton, Nottingham, Norwich and Salford. Will Young played the Emcee and Michelle Ryan portrayed Sally Bowles. It was announced on August 10, 2012, that Siân Phillips, Harriet Thorpe and Matt Rawle would also be joining the cast. The production was made by the creative team behind the 2006 London revival, but they created a different set, lighting, costumes, choreography and direction. The 2012 revival focused more on comic aspects but still expressed the harshness of 1931 Germany. In August 2013 the show went on tour, again with Young as The Emcee, Siobhan Dillon reprising her role of Sally and Lyn Paul joining the cast as Fräulein Schneider.