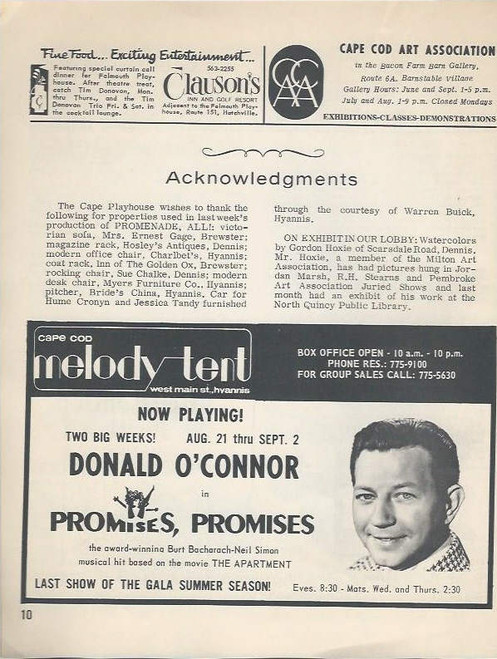 The Cape Playhouse celebrated its 87th season, the Cape Playhouse is proud to be America’s Oldest Professional Summer Theatre; it’s today’s theatre in an historic venue. Californian Raymond Moore spent several summers in Provincetown where he was involved in painting scenery, writing plays and acting in theatre.

His vision, however, was to have a theatre of his own – a smart, sophisticated summer theatre, which would bring Broadway to Cape Cod. So, in 1927, he purchased a 19th century former Unitarian Meeting House for $200, had it moved to 3 1/2 acres of pasture land fronting the Old Kings Highway in Dennis and converted it into a professional theatre.  The Cape Playhouse has been kept true to its original structure – even the original pews still serve as seats.  The opening performance on July 4, 1927 was The Guardsman, starring Basil Rathbone. Over the years, Moore attracted many big name stars from Broadway and the silver screen. Many even made their professional stage debuts at the Cape Playhouse. With such stars as Bette Davis (who first worked as an usher), Gregory Peck, Gertrude Lawrence, Lana Turner, Ginger Rogers, Humphrey Bogart, Tallulah Bankhead, Helen Hayes, Julie Harris, and Paulette Goddard, it’s no wonder the Cape Playhouse is known as “The Birthplace of the Stars”.