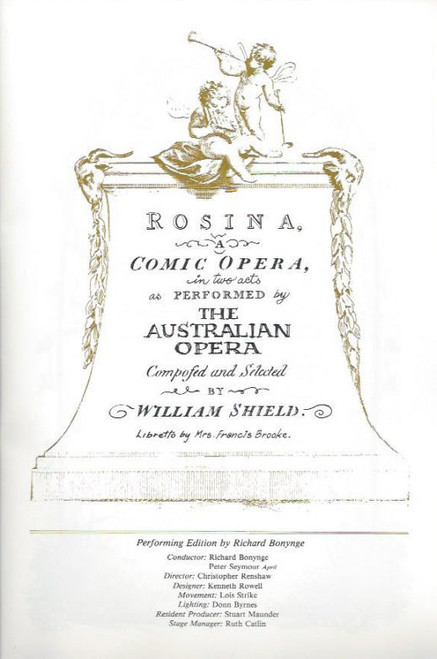 Shield's works include a large number of operas and other stage works, including one on Robin Hood, as well as instrumental music, but he is principally known for his light English opera Rosina (1781). It was intended to be used as a light afterpiece to a more "serious" work sung in Italian. Such works were common at the time, although Rosina is the only one that has survived in the form of a complete score.

Rosina has a number of features associated with later English comic opera, and even modern musical comedy - including the use of English, spoken dialogue, lightness of theme, and the use of folk and popular melodies. At least to that degree, it may be regarded as one of the ancestors of the musical, and Shield as one of the first composers of musicals.

Ba-ta-clan is a "chinoiserie musicale" (or operetta) in one act with music by Jacques Offenbach to an original French libretto by Ludovic Halévy. It was first performed at the Théâtre des Bouffes Parisiens, Paris, on 29 December 1855. The operetta uses set numbers and spoken dialogue and runs for under an hour. Ba-ta-clan was Offenbach's first big success, and opened his new winter theatre, the Salle Choiseul. The witty piece satirised everything from contemporary politics to grand opera conventions. It was frequently revived in Paris, London and New York for decades, and Offenbach eventually expanded it as a full-length piece with a cast of eleven.

The Bear by William Walton

The Bear is the second of the two operas by William Walton, described in publication as an "Extravaganza in One Act". The libretto was written by Paul Dehn and Walton, based on the play of the same title by Anton Chekhov . Popova is a widow, remaining faithful to the memory of her late husband, Popov. Her servant, Luka, remarks upon her affected sorrow. Smirnov, one of Popov's creditors, appears. During the course of the story, it becomes clear that Popov was promiscuous and unfaithful to his wife. Smirnov and Popova begin to quarrel, to the point where both aim loaded pistols at each other. However, neither can fire, as they have fallen in love. As the opera ends, Luka looks on in disbelief at the new lovers.