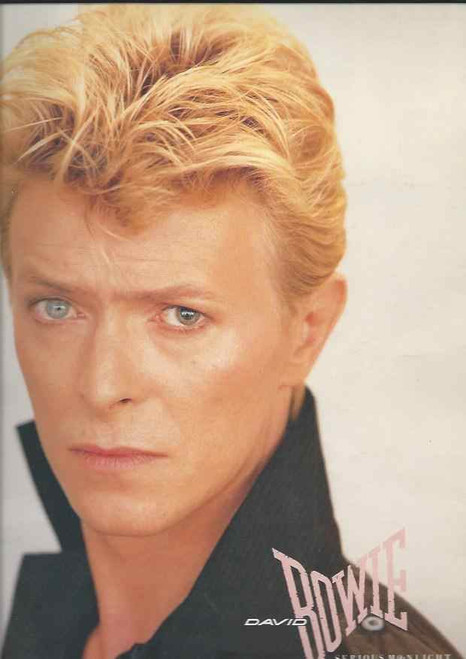 The David Bowie Serious Moonlight Tour was thus far Bowie's longest, largest and most successful concert tour. The tour opened at the Vorst Forest Nationaal - Brussels on 18 May 1983 and ended in the Hong Kong Coliseum on 8 December 1983; 16 countries visited, 96 performances, and over 2.6M tickets sold. The tour garnered mostly favorable reviews from the press.

On 30 June 1983 the performance at the Hammersmith Odeon - London was a charity show for the Brixton Neighbourhood Community Association in the presence of Princess Michael of Kent. The 13 July 1983 Montreal Forum performance was recorded and broadcast on American FM Radio and other radio stations worldwide. The concert on 12 September in Vancouver was recorded for the concert video Serious Moonlight, that was released in 1984 and on DVD in 2006.

At the Canadian National Exhibition Stadium - Toronto, ON performance on 4 September 1983, Bowie introduced onstage special guest, Mick Ronson, who borrowed Earl Slick's guitar and performed "The Jean Genie" with Bowie and band. Mick had only been asked to play the day before, and he later recalled:

I was playing Slick's guitar ... I had heard Slick play solos all night so I decided not to play solos and I just went out and thrashed the guitar. I really thrashed the guitar, I was waving the guitar above my head and all sorts of things. It was funny afterwards because David said, 'You should have seen [Earl Slick's] face...' meaning he looked petrified. I had his prize guitar and I was swinging it around my head and Slick's going 'Waaaa... watch my guitar', you know. I was banging into it and it was going round my head. Poor Slick. I mean, I didn't know it was his special guitar, I just thought it was a guitar, a lump of wood with six strings.

The last show of the tour (8 December 1983) was the third anniversary of John Lennon's death, whom both Bowie and Earl Slick had worked with in the studio previously. Slick suggested to Bowie a few days prior to the show that they play "Across the Universe" as a tribute, but Bowie said, "Well if we're going to do it, we might as well do "Imagine."" They rehearsed the song a couple of times on 5 December (in Bangkok) and then performed the song on the final night of the tour as a tribute to their friend.

Size 245 x 310 mm 54 Pages of great color photos of Bowie, in all of his various incarnations, text, lyrics to songs off of "Let's Dance" LP, and maps of both the U.S. and European legs of the tour.
(Please Note scans are low res for fast loading)
Each Order will incur a $5.00 handling fee (including free shipping)