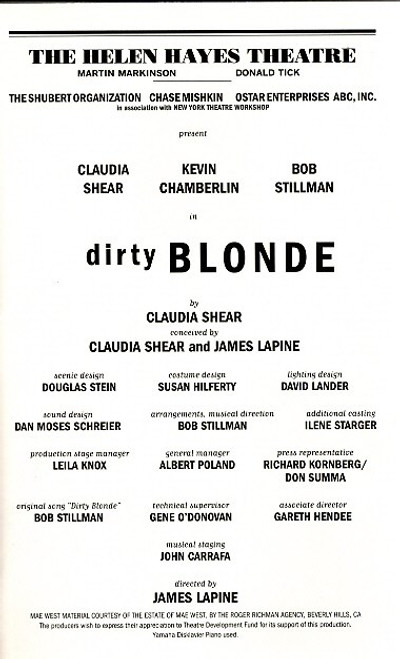 Conceived by Shear and James Lapine and featuring songs from I'm No Angel and She Done Him Wrong, it explores the phenomenon of the legendary Mae West, one of America's most enduring and controversial pop culture icons. The play, which draws its title from the West film quip "I made myself platinum, but I was born a dirty blonde," tells the story of Jo, an office temp and aspiring actress, and Charlie, who works in the New York Public Library's film archives, both lonely and obsessive West fans who meet at her grave and form a unique relationship as they swap stories about the career highlights and eventual decline into parody of the woman they worship. The play had its first staging at the off-Broadway New York Theatre Workshop in early 2000. After 20 previews, the Broadway production, with Shear as Jo/West directed by Lapine, opened on May 1, 2000 at the Helen Hayes Theatre, where it ran for 352 performances. Kevin Chamberlin and Bob Stillman comprised the remainder of the cast. Kathy Najimy replaced Shear later in the run. The play is one of the few in Broadway history to have its entire cast nominated for a Tony Award. It has been produced in London and by regional theatres throughout the United States. Dirty BLONDE (Apr 2000) Claudia Shear, Kevin Chamberlin, Bob Stillman - The Helen Hayes Theatre.