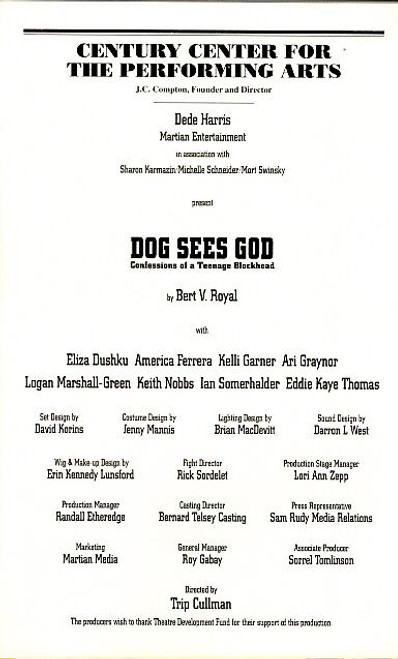 An "unauthorized parody," the play imagines characters from the popular comic strip Peanuts as teenagers. Drug use, suicide, eating disorders, teen violence, rebellion, sexual relations and identity are among the issues covered in this drama. Dog Sees God received its Off-Broadway premiere by Martian Entertainment and Dede Harris at the Century Center for the Performing Arts, opening on December 15, 2005. Presented by Bert V. Royal, the play was directed by the Trip Cullman; the set design was by David Korins; the costume design was by Jenny Mannis; the lighting design was by Brian MacDevitt; the sound design was by Darron L. West; the general manager was Roy Gabay; the production stage manager was Lori Ann Zepp; the assistant stage manager was Tammy Scozzafava; and the production manager was Randall Etheredge. Dog Sees God (Jan 2006) Eliza Dushku, America Ferrera, Kelli Garner, Keith Nobbs - Century Center for Performing Arts.

Dialogues of the Carmelites