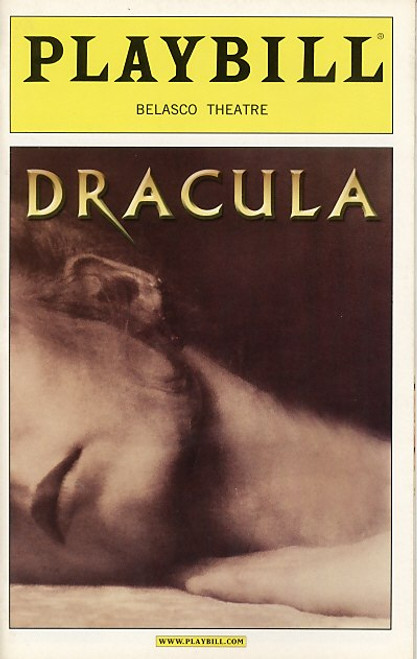 Dracula, the Musical is a musical based on the original Victorian novel by Bram Stoker. The score is by Frank Wildhorn, with lyrics and book by Don Black and Christopher Hampton. It had its regional premiere at the La Jolla Playhouse, La Jolla, California, in 2001, and then premiered on Broadway in 2004. It starred Tom Hewitt as the frightening Count and Melissa Errico as the woman he loves, Mina Harker. The show ran for only 154 performances, and received mainly negative reviews. A brief nudity scene in which Dracula seduces Lucy Westerna (played by Kelli O’Hara) received much publicity, as did the show’s numerous and spectacular special effects. The show later had engagements in Europe.

Dracula the Musical (Nov 2004) Tom Hewitt, Melissa Errico, Don Stephenson, Darren Ritchie – Belasco Theatre. The musical had its world premiere developmental engagement at La Jolla Playhouse from October 9 to November 25, 2001, starring Tom Hewitt in the title role. The musical, after several revisions and additional workshops premiered on Broadway at the Belasco Theatre on August 19, 2004 and closed on January 2, 2005 after 157 performances and 22 previews. Directed by Des McAnuff, the choreography was by Mindy Cooper, the scenic design by Heidi Ettinger, costume design by Catherine Zuber, lighting by Howell Binkley orchestrations by Doug Besterman and special effects by Flying by Foy. The musical starred Tom Hewitt, along with Melissa Errico as Mina. Darren Ritchie joined as Jonathan Harker, with Stephen McKinley Henderson as Van Helsing, and Chris Hoch as Arthur Holmwood.