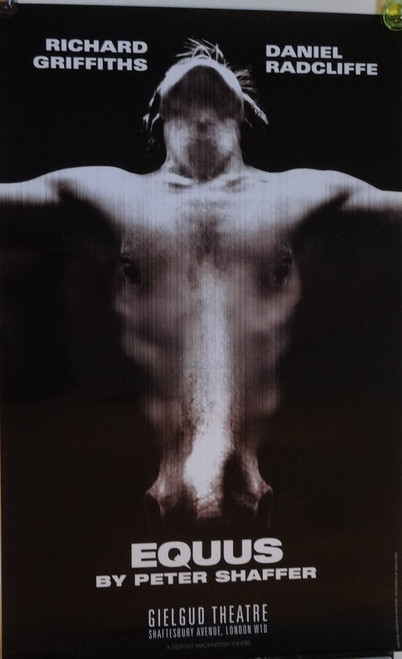 A Play by Peter Shaffer

Equus is a play by Peter Shaffer written in 1973, telling the story of a psychiatrist who attempts to treat a young man who has a pathological religious fascination with horses.
Shaffer was inspired to write Equus when he heard of a crime involving a 17-year-old who blinded six horses in a small town near Suffolk. He set out to construct a fictional account of what might have caused the incident, without knowing any of the details of the crime. The play's action is something of a detective story, involving the attempts of the child psychiatrist Dr. Martin Dysart to understand the cause of the boy's actions while wrestling with his own sense of purpose,

Equus was revived in 2007 in the West End by producers David Pugh and Dafydd Rogers, starring Richard Griffiths, Daniel Radcliffe, and Joanna Christie in the leading roles. The production was directed by Thea Sharrock, and opened in February 2007 at the Gielgud Theatre. The production attracted press attention, as both Radcliffe and Griffiths appeared in the Harry Potter film series (as Harry Potter and Vernon Dursley, respectively). In particular, the casting of then 17-year-old Radcliffe caused some controversy since the role of Alan Strang required him to appear nude on stage. Radcliffe insisted that the nude scene was not "gratuitous" and that he should portray the character and the scene as called for by the script.

(Please Note scans are low res for fast loading)
All Posters are sent rolled in a hard cardboard Tube
Each Order will incur a $5.00 handling fee (including free shipping)
All Prices Shown are in USD (United States of America Dollars)
All Payments by Paypal Just Checkout as GUEST no need to register