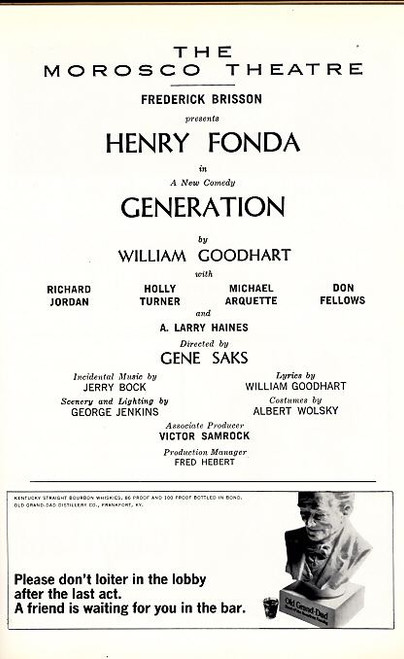 William Malcolm Goodhart, whose first effort at play writing became a Broadway hit, died on Oct. 20 at his home on Shelter Island, N.Y. He was 74. The cause was heart disease, his family said. Mr. Goodhart achieved the dream of every aspiring playwright when his comedy, ''Generation,'' opened on Broadway in 1965 and quickly found an audience. The show, directed by Gene Saks, starred Henry Fonda as a parent coping with his determinedly unconventional daughter and son-in-law, who decide to deliver their own baby. Despite some lukewarm reviews, ''Generation'' settled in for a long run and was adapted for the screen by Mr. Goodhart in 1969. Henry Fonda, Richard Jordan, Holly Turner, Michael Arquette, Don Fellows Generation by William Goodhart (Oct 1965)

Gem of the Ocean