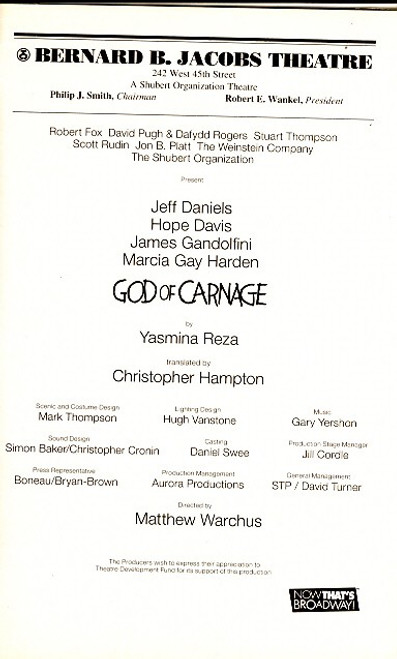 God of Carnage (originally Le Dieu du Carnage) is a play by Yasmina Reza, first directed by Jürgen Gosch and performed in Zürich on 8 December 2006. The play was produced in Paris in January 2008 with Isabelle Huppert and Eric Elmosnino, and in English in London on 25 March 2008, in a translation by Christopher Hampton. The play is about two pairs of parents, one of whose child has hurt the other at a public park, who meet to discuss the matter in a civilized manner. However, as the evening goes on, the parents become increasingly childish, resulting in the evening devolving into chaos. In 2009, God of Carnage was given the Laurence Olivier Award for Best New Comedy. God of Carnage won Best Play as well as Best Direction and Best Actress In A Play (for Marcia Gay Harden) at the 2009 Tony Awards. Jeff Daniels, Hope Davis, James Gandolfini, Marcia Gay Harden.