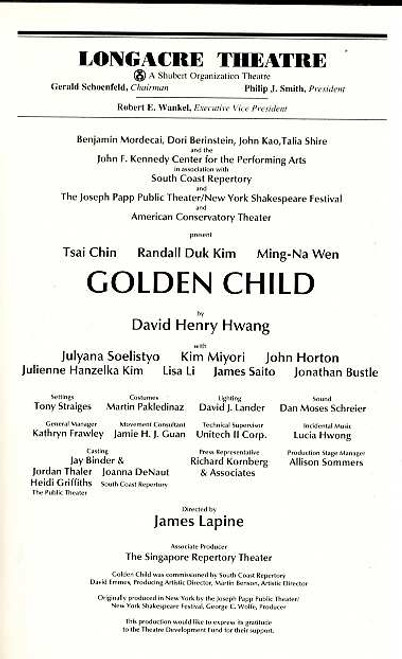 Golden Child is an Obie Award-winning play by American playwright David Henry Hwang. Hwang's second Broadway play, it depicts a nineteenth century Chinese family being faced with Westernization. The play was developed Off-Broadway and premiered there on November 19, 1996 at the Joseph Papp Public Theater. It was directed by James Lapine, with Tsai Chin, and Jodi Long in the cast. It was then revised during productions in California and Singapore. Then, it premiered on Broadway at the Longacre Theatre on April 2, 1998. This production was also directed by Mr. Lapine, with Randall Duk Kim and Ming-Na Wen in addition to Long. It was nominated for the Tony Award for Best Play that year. It is published by Theatre Communications Group and also in an acting edition published by Dramatists Play Service.