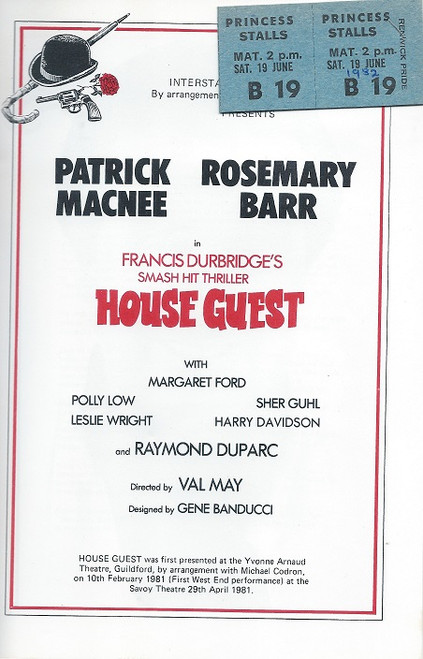 Frances Durbridge was born in Hull, East Riding of Yorkshire, and educated at Bradford Grammar School, where he was encouraged to write by his English teacher. He continued to do so while studying English at the University of Birmingham. After graduating in 1933, he worked for a short time as a stockbroker's clerk before selling a radio play, Promotion, to the BBC at the age of 21.
Durbridge created the character of Paul Temple, a crime novelist and detective, in the 1930s. With Steve Trent, a Fleet Street journalist who would later become his wife, Temple solved numerous crimes in the glamorous world of the leisured middle classes, first on radio, then in films and, from 1969 to 1971, in a television series. In addition to the Paul Temple series, Durbridge wrote other mysteries for radio and television, many of which were also produced for Dutch, German and Italian television and radio. In the Netherlands Temple was known as Paul Vlaanderen.

This Souvenir Program is from the 1982 - Princess Theatre Melbourne

Size 240 x 165 mm  Pictures and information of the cast and show.
Condition: Used Good 8/10  -  original ticket stapled to 2nd page
(Please Note scans are low res for fast loading)
Each Order will incur a $5.00 handling fee (including free shipping)
All Prices Shown are in USD (United States of America Dollars)
All Payments by Paypal Just Checkout as GUEST no need to register