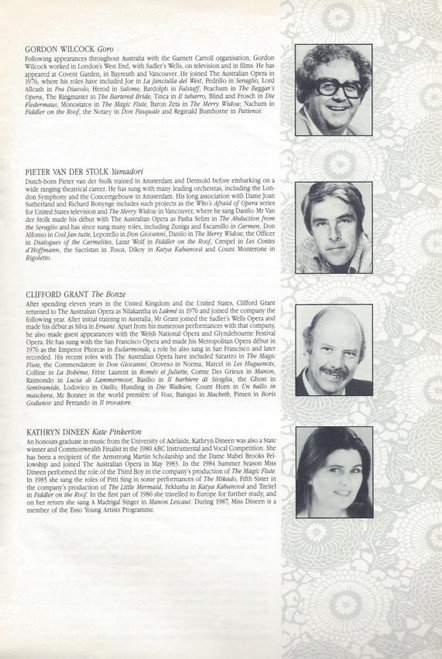 Madama Butterfly (Madame Butterfly) is an opera in three acts (originally two acts) by Giacomo Puccini, with an Italian libretto by Luigi Illica and Giuseppe Giacosa. The libretto of the opera is based in part on the short story  "Madame Butterfly"  (1898) by John Luther Long – which in turn was based partially on stories told to Long by his sister Jennie Correll and partially on the semi-autographical 1887 French novel Madame Chrysanthème by Pierre Loti. Long's short story was dramatized by David Belasco as a one-act play, Madame Butterfly: A Tragedy of Japan (1900). After premiering in New York, Belasco's play moved to London, where Puccini saw it in the summer of 1900.

The first “Esso Opera in the Park” in the Sydney Domain quickly became an annual event, and it is now called “Opera in the Domain”. Typically, it attracts almost 100,000 people each year. A similar annual outdoor event, which attracts more than 25,000 people, is held in Melbourne. The second was the establishment of “The Esso Young Artists’ Development Program” for the Australian Opera while the third was the “Australian Compositions Program” launched with a new production of Brian Howard’s Metamorphosis.