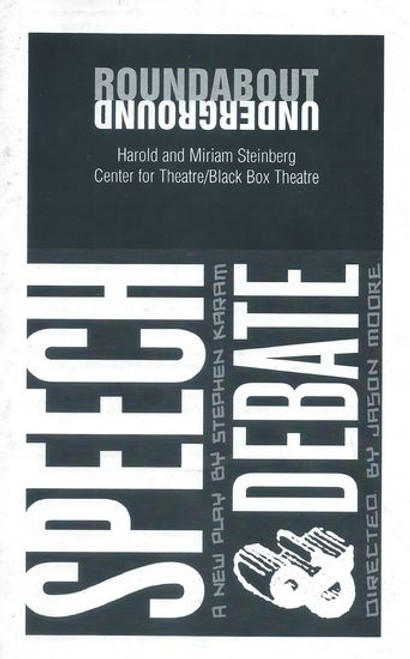 Speech & Debate is a play written by Stephen Karam. The play concerns three misfit teenagers who live in Salem, Oregon.Speech & Debate opened Off-Broadway at Roundabout Underground on October 2007 and ran through February 28, 2008 in a Roundabout Theater Company production.[1] Directed by Jason Moore, the cast featured Gideon Glick (Howie), Sarah Steele (Diwata), Jason Fuchs (Solomon) and Susan Blackwell (Teacher/Reporter)The play, a dark comedy with music, concerns three misfit teenagers and their attempts to expose a drama teacher who preys on teen boys. Solomon is a reporter for the school newspaper, Howie is a gay teen, who is solicited by the school's drama teacher on the internet, and Diwata is an aspiring actress/singer, but with no talent.
They decide to perform a musical version of Arthur Miller's The Crucible, combined with time travel and a young Abraham Lincoln, to address the issue of gay adults at the school.

The Merchant of Venice

The Merchant of Venice