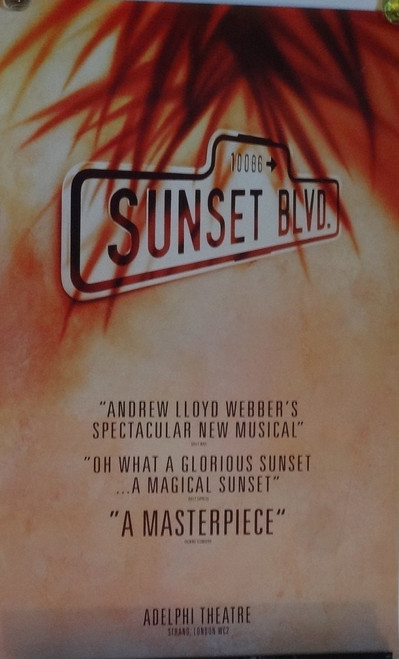 Sunset Boulevard is a musical with book and lyrics by Don Black and Christopher Hampton, and music by Andrew Lloyd Webber. Based on Billy Wilder's Academy Award-winning 1950 film of the same title, the plot revolves around Norma Desmond, a faded star of the silent screen era, living in the past in her decaying mansion on the fabled Los Angeles street. When young screenwriter Joe Gillis accidentally crosses her path, she sees in him an opportunity to make her return to the big screen. Romance and tragedy follow. Opening first in London in 1993, the musical has had several long runs internationally and also enjoyed extensive tours. However, it has been the subject of several legal battles and ultimately lost money due to its extraordinary running costs.

The original West End production, directed by Trevor Nunn and choreographed by Bob Avian, with costumes from Anthony Powell, opened on 12 July 1993 at the Adelphi Theatre. The cast featured Patti LuPone as Norma Desmond, Kevin Anderson as Joe Gillis, Meredith Braun as Betty Schaefer, and Daniel Benzali as Norma's ex-husband, Max. Billy Wilder and his wife Audrey were joined by Nancy Olson, who had played Betty Schaefer in the original film, at the opening night performance. Of it, Wilder observed, "The best thing they did was leave the script alone," and of Patti LuPone he exclaimed, "She's a star from the moment she walks on stage".