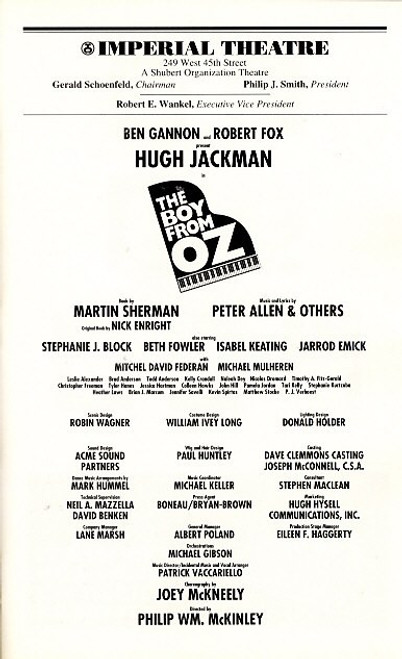 The Boy from Oz (Sept 2004) Hugh Jackman - Imperial Theatre The Boy From Oz is a jukebox musical based on the life of singer/songwriter Peter Allen and featuring songs written by him. The book is by Nick Enright. The Boy From Oz was the first Australian musical to reach Broadway It started previews at the Imperial Theatre on 16 September 2003, opened on 16 October 2003 and closed on 12 September 2004, at the end of Hugh Jackman's contract. It was adapted for the American audience by playwright Martin Sherman, who removed some of the Australianisms (such as 'jackaroo') and expanded the role of US characters Garland and Minnelli. The Boy from Oz (Musical) Hugh Jackman as Peter Allen Imperial Theatre NYC (Sept 2004) Each Order will incur a $5.00 handling fee (Shown as Tax) per Order (including free shipping)