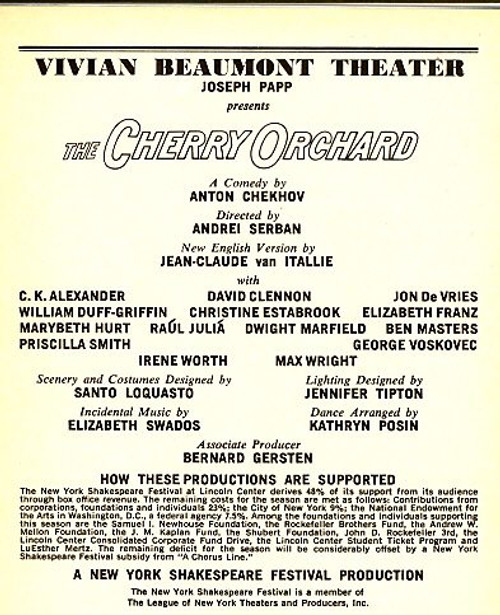 The Cherry Orchard (Вишнëвый сад or Vishnyovy sad in Russian) is Russian playwright Anton Chekhov's last play. It premiered at the Moscow Art Theatre 17 January 1904 in a production directed by Constantin Stanislavski. Chekhov intended this play as a comedy and it does contain some elements of farce; however, Stanislavski insisted on directing the play as a tragedy. Since this initial production, directors have had to contend with the dual nature of this play. The play concerns an aristocratic Russian woman and her family as they return to the family's estate (which includes a large and well-known cherry orchard) just before it is auctioned to pay the mortgage. While presented with options to save the estate, the family essentially does nothing and the play ends with the estate being sold to the son of a former serf, and the family leaving to the sound of the cherry orchard being cut down. The story presents themes of cultural futility — both the futility of the aristocracy to maintain its status and the futility of the bourgeoisie to find meaning in its newfound materialism. In reflecting the socio-economic forces at work in Russia at the turn of the 20th century, including the rise of the middle class after the abolition of serfdom in the mid-19th century and the sinking of the aristocracy, the play reflects forces at work around the globe in that period. Since the first production at the Moscow Art Theatre, this play has been translated into many languages and produced around the world, becoming a classic work of dramatic literature. Some of the major directors in the West have directed this play, each interpreting the work differently. Some of these directors include Charles Laughton, Peter Brook, Andrei Serban, Eva Le Gallienne, Jean-Louis Barrault, Tyrone Guthrie and Giorgio Strehler. The play's influence has also been widely felt in dramatic works by many including Eugene O'Neill, George Bernard Shaw and Arthur Miller. The Cherry Orchard (Jul 1977) Raul Julia, C.K Alexander, David Clennon, Jon De Vries, Elizabeth Franz, Ben Masters, Priscilla Smith - Vivian Beaumont Theatre.

Condition: Used Fair to Good (Some age marks and Yellowing) 7/10