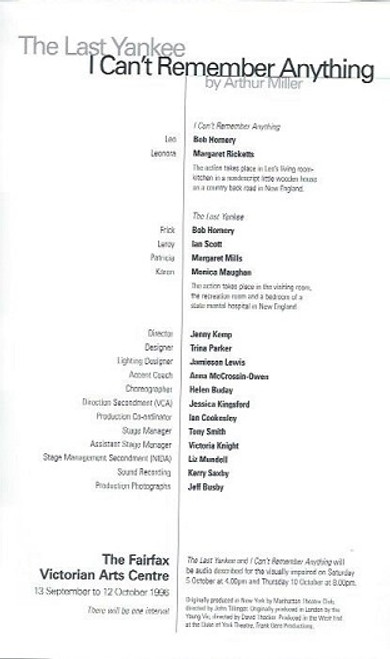 The Last Yankee I Can't Remember Anything

Jump to: navigation, search
The Last Yankee is a play by Arthur Miller, which premiered on January 5, 1993 at the Manhattan Theatre Club in New York City. The cast included Tom Aldredge as John Frick, Frances Conroy as Patricia Hamilton, Rose Gregorio as Karen Frick, John Heard as Leroy Hamilton, and Charlotte Maier as the Patient. The play had been performed previously in a much shorter version two years earlier. It is a play in two parts which focuses on the relationships of two couples - Leroy and Patricia Hamilton, married many years with seven children, and John and Karen Frick, a childless couple.

Both women are patients at a mental institution, and act one sees the two men meet for the first time in the waiting room on visitors' day. Karen has not long been institutionalised, and Frick is having a difficult time coping with her mental illness, while Patricia has been in and out of institutions for many years. The two men struggle to communicate under the circumstances, though even this breaks down in the face of their respective situations. Patricia and Karen have become friendly during their time together in the ward, and act two sees the four characters brought together inside, where a picture emerges of a society whose members feel obscurely cheated and where success is equated with failure.