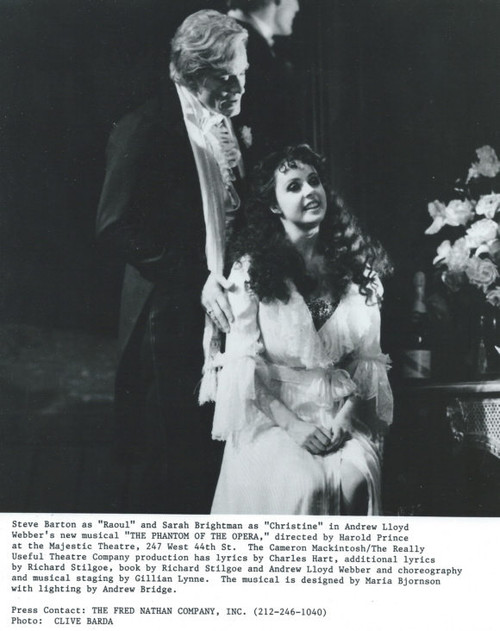 The Phantom of the Opera (Musical) Steve Barton, Sarah Brightman

The Phantom of the Opera is a musical with music by Andrew Lloyd Webber and lyrics by Charles Hart with additions from Richard Stilgoe. Lloyd Webber and Stilgoe also wrote the musical's book together. Based on the French novel Le Fantôme de l'Opéra by Gaston Leroux, its central plot revolves around a beautiful soprano, Christine Daaé, who becomes the obsession of a mysterious, disfigured musical genius.

Phantom began Broadway previews at the Majestic Theatre on 9 January 1988 and opened on 26 January.Crawford, Brightman, and Barton reprised their respective roles from the West End. The production continues to play at the Majestic, where it became the first Broadway musical in history to surpass 10,000 performances on 11 February 2012. On 26 January 2013 the production celebrated its 25th anniversary with its 10,400th performance. It is, by over 3,000 performances, the longest-running show in Broadway history.