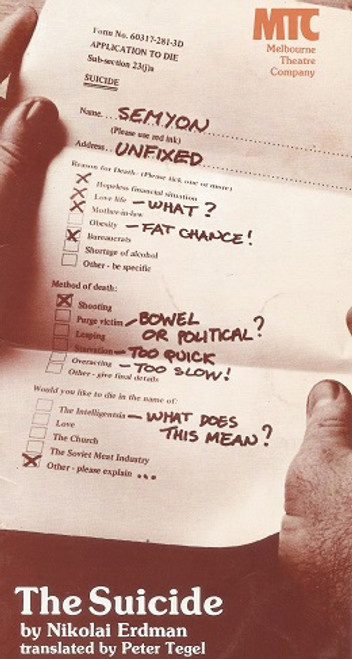 The Suicide is a 1928 play by the Russian playwright Nikolai Erdman. Its performance was proscribed during the Stalinist era and it was only produced in Russia several years after the death of its writer. Today it is regarded as one of the finest plays to have come out of Communist Russia.
The Suicide was first translated into English by Peter Tegel and premiered by the Royal Shakespeare Company at The Other Place, Stratford, on 13 June 1979. The production was directed by Ron Daniels, and the lead role of Semyon Semyonovitch was played by Roger Rees.
It was first put on Broadway on 9 October 1980 at the ANTA Playhouse (now called the August Wilson Theatre) and closed on 30 November 1980 after 60 performances. It was directed by Jonas Jurasas, movement by Ara Fitzgerald, scene and costume by Santo Loquasto, lighting design by F. Mitchell Dana, sound design by Jack Shearing, and costume and hair design by J. Roy Helland. The cast featured Derek Jacobi, Grayson Hall, John Heffernan, Angela Pietropinto, Susan Edwards, Laura Esterman, Clarence Felder, Cheryl Giannini, Carol Mayo Jenkins, David Patrick Kelly, Derek Meader, William Myers, Mary Lou Rosato, David Sabin, Leda Siskind, Chip Zien, and Jeff Zinn.

This Souvenir Brochure is from the 1995 Melbourne Production

The Lifespan of a Fact