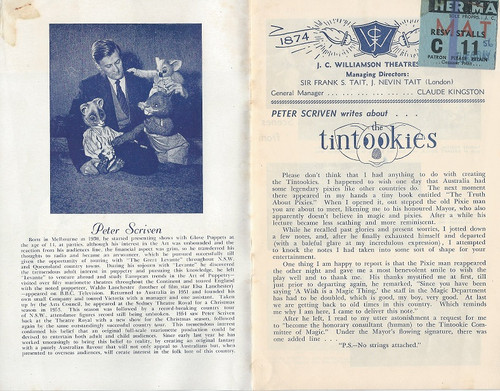 Peter Scriven played a huge role in establishing puppetry as a serious artform in Australia. His Tintookies and Little Fella Bindi toured all over Australasia. The Tintookies, from an Aboriginal word meaning 'little people who come from the sandhills', was an elaborate marionette musical first staged by creator Peter Scriven at the Elizabethan Theatre in Sydney in 1956. After the success of this production, Tintookie became the generic name for any of the puppets used by the Marionette Theatre of Australia, formed by Scriven under the auspices of the Elizabethan Theatre Trust in 1965. The board was chaired by Sir Howard Beale, president of the Arts Council, and included Dr H.C. Coombs, Dorothy Helmrich and Scriven, who was also artistic director. Apart from commissioning and presenting original Australian puppet works, the Marionette Theatre of Australia was to establish a training school, encourage the development of other groups, and import overseas companies.

The Marionette Theatre of Australia produced innovative large-scale puppet shows with an overtly Australian content for children for more than 20 years, including the landmark productions LittleFella Bindi (1958) and Norman Lindsay's The Magic Pudding (1960). Bindi, the Aboriginal boy lead in LittleFella Bindi was manipulated by Scriven. He was supported by a team of five young puppeteers supervised by Igor Hyczka, a stage manager, a sound technician and a tour manager, Tony Gould (later to head the Queensland Performing Arts Centre). Later productions included The Explorers (telling the story of Australian explorers, Burke and Wills) and The Water Babies. A film version of The Explorers was produced in 1968 by Scriven for Film World Pty. Ltd.