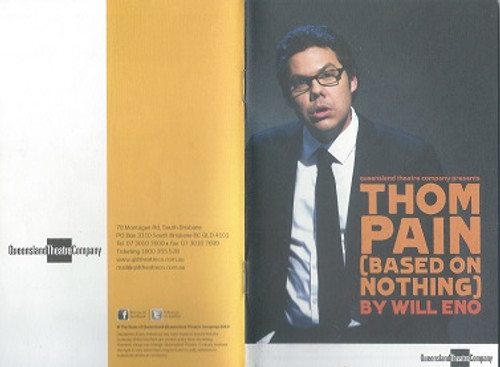 Thom Pain (based on nothing) Queensland Theatre Company 2010

Thom Pain (based on nothing) is a 2004 one man show written by Will Eno. It is a rambling monologue in which the protagonist, who has suffered a lot in his life, tells the story of a bee sting, a boy with a dog that died, and his experience with a woman. The play started as a reading at the Soho Theatre and was then performed at the Edinburgh Festival Fringe in 2004. The play next opened in London at the Soho Theatre, running from 3 to 24 September 2004. It received the First Fringe Award.

Thom Pain (based on nothing) premiered in the United States Off-Broadway at the DR2 Theatre on February 1, 2005 and closed on September 4, 2005.The original production starred James Urbaniak, and was directed by Hal Brooks. Urbaniak was nominated for the Drama Desk Award for Outstanding Solo Performance for his portrayal of Thom Pain.