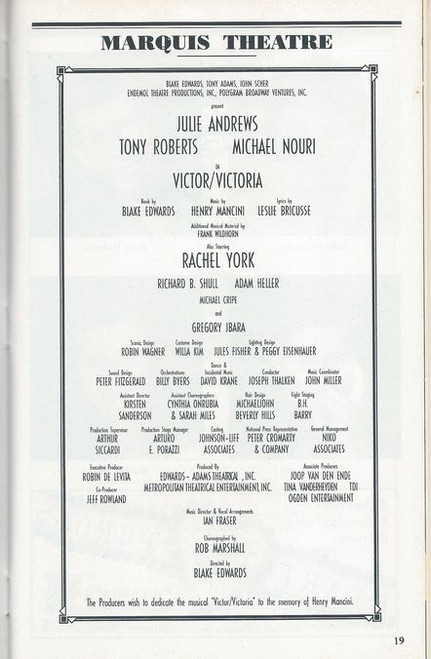 Victor/Victoria is a musical with a book by Blake Edwards, music by Henry Mancini, lyrics by Leslie Bricusse and additional musical material (music and lyrics) by Frank Wildhorn. It is based on the 1982 film of the same name.</p><p>After 25 previews, the Broadway production, directed by Edwards and choreographed by Rob Marshall, opened on October 25, 1995 at the Marquis Theatre, where it ran for 734 performances. The original cast included Julie Andrews (reprising her role in the film), Tony Roberts, Michael Nouri, Rachel York, Richard B. Shull, and Rob Ashford. Mancini died before he could complete the music, and Wildhorn was brought in to finish the score. The original Broadway production, in 1995, aroused some mild controversy when the star, Julie Andrews, feeling that the rest of the show had been overlooked, refused her (and the show's only) Tony Award nomination.