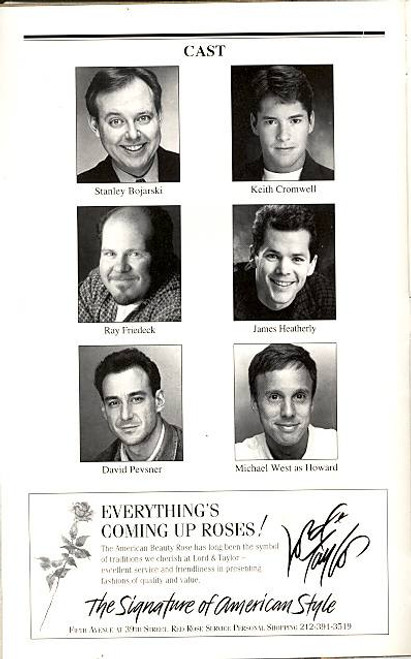 Mark Waldrop's sketches and lyrics set to Dick Gallagher's music keep up with Crabtree's imagination, but just barely. For instance there's a running-gag series of three torch-songs done by Peter Carey as a moony, gay man bemoaning his luscious crushes on three famous unrequiting men whose names are --- Newt, Strom, and Rush??? There are three Elvis like-a-looks pierced in different bodily areas by Cupid's "Shaft of Love".

There's a series of three mixmastered "Coming Attractions" for a small-time community theater trying to do new musical comedies on familiar themes like "Quasimodo???" "A good old fashioned revue given a gay new fashioned twist and the kind of fantasicated costumes that could have your eyes out on stalks.... Gallagher's music is glitter bright and tuneful."-- N.Y. Post. In this side splitting musical extravaganza by the creators of Howard Crabtree's Whoop Dee Doo!, new heights of hilarity are achieved in outrageous skits. During its long off Broadway run it has been honored with two Drama Desk awards including Best Musical Revue and two Outer Critics Circle awards including Best Off Broadway Musical.