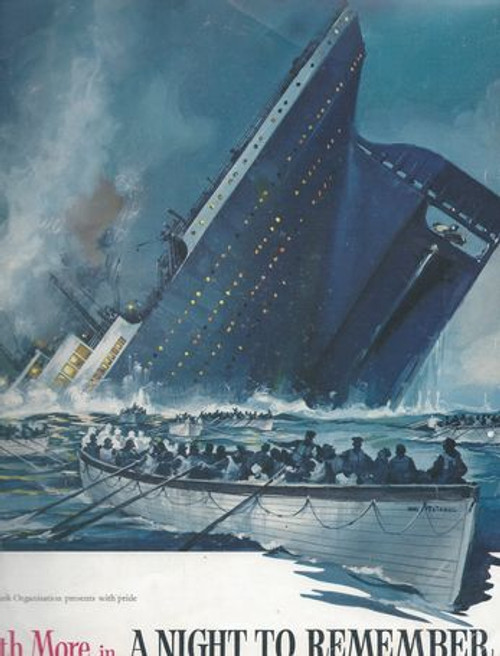 A Night to Remember - Souvenir Program 1958

A successful attempt at an even-handed portrayal of the White Star Line's (later part of Cunard) luxury liner R.M.S. Titanic's sinking from the standpoint of 2nd Officer Charles Herbert Lightoller, himself the most senior of the ill-fated ship's Deck Officers to survive the disaster. (Lightoller later went on to distinguish himself as a line British Naval Officer during the First World War and served as a Senior Naval Staff Officer (convoys) during WWII. Between wars he owned and operated a successful family business producing pleasure craft.) His own survival of the sinking, along with several others, is shown atop one of the liner's two "collapsible" lifeboats which was capsized in floating off the liner as it sank. The picture depicts then known facts (c1958) as reported after the sinking; such as the woeful lack of adequate lifeboats, the ship's band playing true to the very end, White Star's co-owner Bruce Ismay's somewhat less than chivalrous departure from the sinking vessel -and- the Titanic's designer (Andrews, on-board) revelation that due to the severity of below-the-water-line damage and that the vaunted watertight compartments were not designed to nor sealed up to the weather deck, would only delay the inevitable as sea water spilled over the top of one to the next from the bows to the stern. It also addresses the mysterious ship seen from the Titanic's bridge stopped some 12-19 miles off and depicts it as being the S.S. Californian, whom - if that steamship had responded, the loss of life could have been far, far less. The Californian is seen stopped due to the ice warnings, the same alerts whose import were undervalued by the Titanic's Captain Smith. She herself had shut-down wireless operations, nominally at 11:00pm as her sole operator retired for the evening, this before the iceberg was struck and the 1st distress calls were made by Titanic. It also addresses somewhat the coal fire in one of Titanic's bunkers - apparently not uncommon back in those days, before her departure into the Atlantic and potential for damage to steel plates below the water line.

Condition: Used Good/Fair (the cover has a tape repair on spine, and some spine scraps inside is good)

A Night to Remember

A Night with Janis Joplin - 3