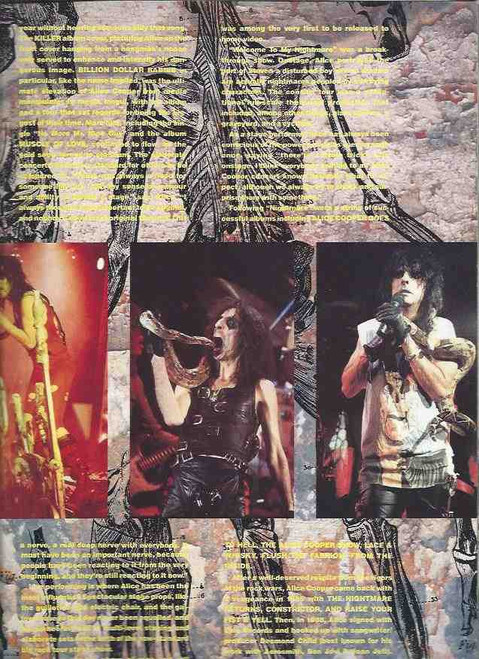 Alice Cooper (born Vincent Damon Furnier, February 4, 1948) is an American rock singer, songwriter, and musician whose career spans five decades. With a stage show that features guillotines, electric chairs, fake blood, boa constrictors, and baby dolls, he is considered by fans and peers alike to be "The Godfather of Shock Rock"; Cooper has drawn equally from horror movies, vaudeville, and garage rock to pioneer a grandly theatrical and macabre brand of rock designed to shock.

After Alice's return to the music industry in 1986 with the successful "The Nightmare Returns" tour, Cooper had sought assistance from Desmond Child to create a comeback album. Trash became one of Cooper's biggest albums, accompanied by music videos for "Poison", "Bed of Nails", "House of Fire", and "Only My Heart Talkin'". A successful year-long worldwide concert tour in support of the album was documented in the home video release Alice Cooper Trashes The World.