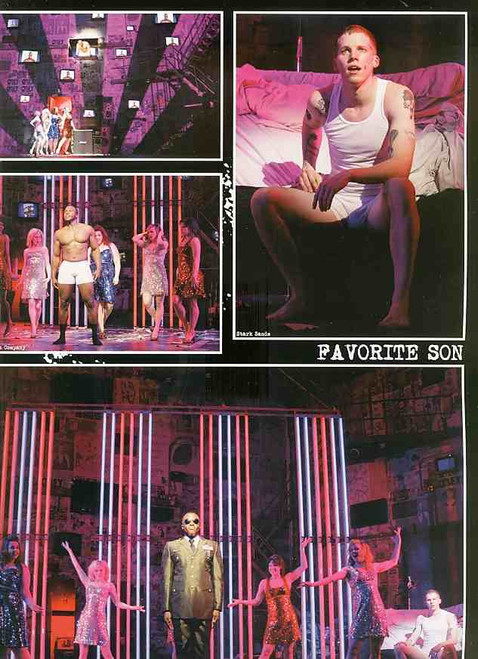 American Idiot is a one-act, through-sung stage musical. The show is an adaptation of punk rock band Green Day's concept album of the same name. Additional Green Day songs were interpolated from other sources, including 21st Century Breakdown, American Idiot b-sides, and an unreleased song called "When It's Time". The book is by Green Day's lead singer Billie Joe Armstrong and director Michael Mayer. The music is by Green Day and the lyrics are by Armstrong.

The story, expanded from that of the concept album, centers on three disaffected young men, Johnny, Will, and Tunny. Johnny and Tunny flee stifling suburbia and their parents' restrictions. The pair look for meaning in life and try out the freedom and excitement of the city. Will stays home to work out his relationship with his pregnant girlfriend. Tunny quickly gives up on life in the city, joins the military, and is shipped off to war. Johnny finds a part of himself that he grows to dislike, has a relationship and experiences lost love.

After a run at the Berkeley Repertory Theatre 2009, the show moved to Broadway, at the St. James Theatre. Previews began on on March 24, 2010 and officially opened on April 20, 2010. The show closed on April 24, 2011 after 422 performances. While Green Day did not appear in the production, lead singer Billie Joe Armstrong performed the role of "St. Jimmy" occasionally throughout the run. The show also had an onstage band.The show opened to mixed to positive reviews from critics, but got a rave review from The New York Times American Idiot won two 2010 Tony Awards: Best Scenic Design of a Musical for Christine Jones, and Best Lighting Design of a Musical for Kevin Adams. It also received a nomination for Best Musical. On February 13, 2011, it won a Grammy Award for Best Musical Show Album.