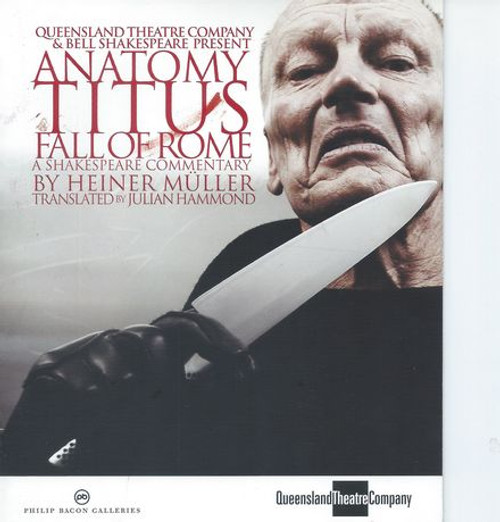 Titus Andronicus is a tragedy by William Shakespeare, believed to have been written between 1588 and 1593, probably in collaboration with George Peele. It is thought to be Shakespeare's first tragedy and is often seen as his attempt to emulate the violent and bloody revenge plays of his contemporaries, which were extremely popular with audiences throughout the 16th century.

In 1984, German playwright Heiner Müller adapted the play into Anatomie Titus: Fall of Rome. Ein Shakespearekommentar (Anatomy Titus: Fall of Rome. A Shakespearean Commentary). Interspersing the dialogue with a chorus like commentary, the adaptation was heavily political and made reference to numerous twentieth century events, such as the rise of the Third Reich, Stalinism, the erection of the Berlin Wall and the attendant emigration and defection issues, and the 1973 Chilean coup d'état. Müller removed the entire first act, replacing it was a narrated introduction, and completely rewrote the final act. He described the work as "terrorist in nature", and foregrounded the violence; for example Lavinia is brutally raped on stage and Aaron takes several hacks at Titus' hand before amputating it. First performed at the Schauspielhaus Bochum, it was directed by Manfred Karge and Matthias Langhoff, and is still regularly revived in Germany.