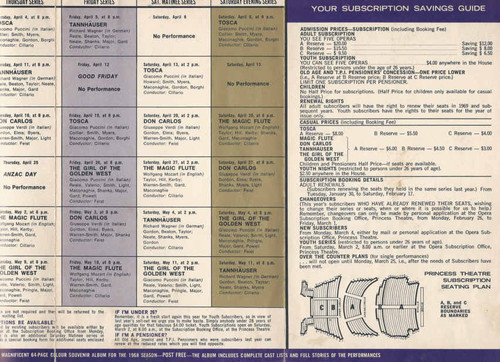 A major milestone for the company was a television recording of Puccini's Tosca filmed in 1968 at the Adelaide Festival. This starred Tito Gobbi as Scarpia alongside two Australian singers, soprano Marie Collier in the title role, and tenor Donald Smith as Cavaradossi, with the Argentinian born, Italian conductor Carlo Felice Cillario conducting. This was the commencement of a long and fruitful association between the Australian Opera and Maestro Cillario until his retirement in 2003. Some of his first rehearsals in the country involved conducting the Elizabethan Sydney Orchestra and the Australian Opera Chorus, both newly formed and on permanent contracts.

While not yet appearing with this company, Joan Sutherland, then an internationally known Australian soprano, and her husband, the conductor Richard Bonynge, helped the cause of opera in general in Australia during the 1960s. Sutherland's name was also linked to the progress of the Sydney Opera House, begun in 1957 and still undergoing a lengthy and controversial construction. By the time 'La Stupenda' appeared there in 1974, one year after the opening of the theatre, the company was a leading repertory company with a large chorus and a roster of experienced Australian principals supplemented by guest singers and conductors. In 1970, the company became known as The Australian Opera.

Flyers folds out to be about 8 playbill size pages with all the details of 1968 Opera including: Tosca, The Magic Flute, Don Carlos, Tannhauser, Guest Artists for 1968 - Marie Collier, Marcella Reale, Lauris Elms, Kenneth Neate, Raymond Myers.