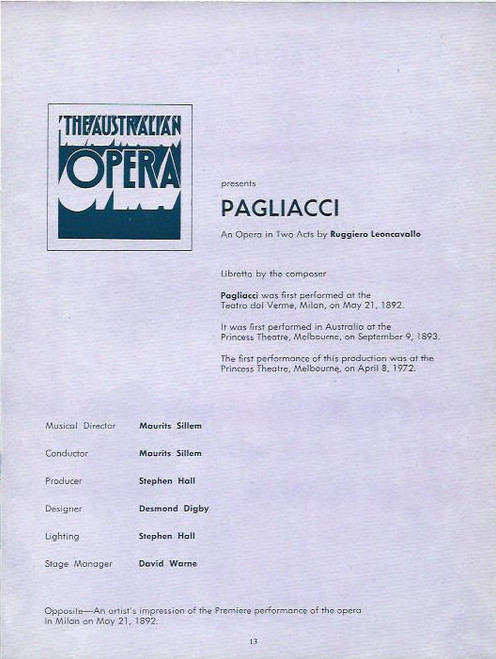 Cavalleria rusticana  is an opera in one act by Pietro Mascagni to an Italian libretto by Giovanni Targioni-Tozzetti and Guido Menasci, adapted from a play and short story written by Giovanni Verga. Considered one of the classic verismo operas, it premiered on 17 May 1890, at the Teatro Costanzi in Rome. Since 1893, it has often been performed in a so-called Cav/Pag double-bill with Pagliacci by Ruggero Leoncavallo.

First performance in Australia at the Princess Theatre, Melbourne on September 25, 1893

Pagliacci  is an Italian opera in a prologue and two acts, with music and libretto by Ruggero Leoncavallo. It is the only Leoncavallo opera that is still widely staged.

Pagliacci premiered at the Teatro Dal Verme in Milan on 21 May 1892, conducted by Arturo Toscanini (who did not like it), with Adelina Stehle as Nedda, Fiorello Giraud as Canio, Victor Maurel as Tonio, and Mario Ancona as Silvio. Nellie Melba played Nedda in London in 1892, soon after its Italian premiere, and was given in New York on 15 June 1893. The Metropolitan Opera's staging on 22 December of that year was the first time that it appeared along with Pietro Mascagni's Cavalleria rusticana.

First Performance in Australia at the Princess Theatre Melbourne on September 9, 1893. Souvenir Brochure

Size 180 x 235 mm Lots of illustrations and information on the Operas
Condition: Used Fair/Good 7/10 Looks ok for its age Has a dog ear on front cover and a small pen mark
(Please Note scans are low res for fast loading)