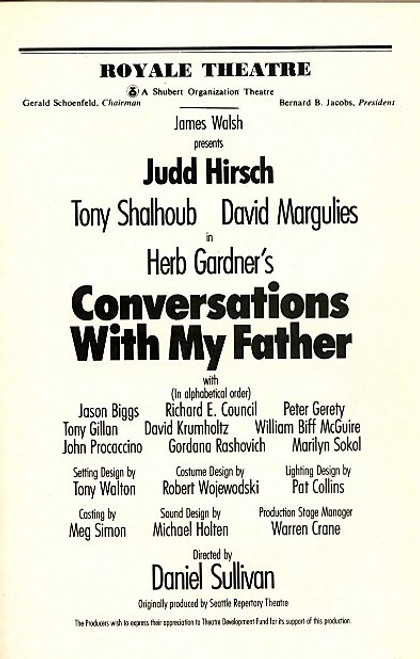 At its core are Eddie Ross (born Goldberg), a Russian immigrant Canal Street bartender, and his son Charlie, who yearns to establish - at the very least - a peaceful co-existence with his angry, remote, and verbally and emotionally abusive father, who has spent forty years in America's melting pot trying to reject his heritage. While exploring the relationship between the two, Gardner presents the saga of a first generation of American Jews who came of age in the Depression and were assimilated at a high price during and after World War II. The play's many vignettes span the years between 1936 and 1976. The play was originally produced by the Seattle Repertory Theatre. After 30 previews, the Broadway production, directed by Daniel Sullivan, opened on March 22, 1992 at the Royale Theatre, where it ran for 402 performances. The opening night cast included Judd Hirsch, Tony Shalhoub, David Margulies, John Procaccino, Richard E. Council, David Krumholtz, and Jason Biggs. Jason Woliner replaced Krumholtz for the second half of the run, and James Belushi replaced Hirsch for the final two months before the play closed. Conversations With My Father by Herb Gardner (Jun 1992) Judd Hirsch, Tony Shalhoub, David Margulies - Royale Theatre.