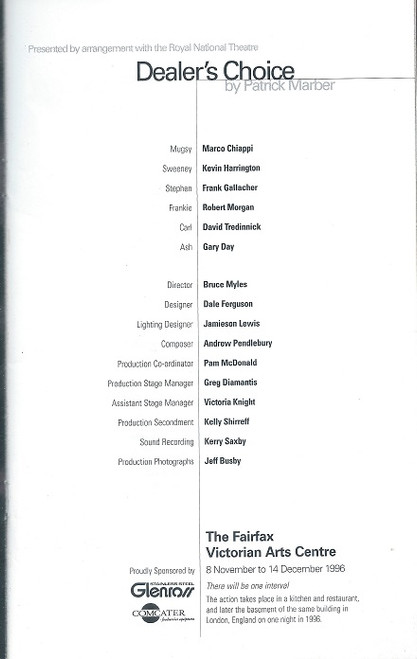 Marber's first play was Dealer's Choice, which he also directed. Set in a restaurant and based around a game of poker (and partly inspired by his own experiences with gambling addiction), it opened at the National Theatre in February 1995, and won the 1995 Evening Standard Award for Best Comedy. Patrick Albert Crispin Marber (born 19 September 1964) is an English comedian, playwright, director, actor, and screenwriter. After Miss Julie, a version of the Strindberg play Miss Julie, was broadcast on BBC television in the same year. In this, Marber moves the action to Britain in 1945, at the time of the Labour Party's victory in the general election, with Miss Julie as the daughter of a Labour peer. A stage version, directed by Michael Grandage, was first performed 2003 at the Donmar Warehouse, London by Kelly Reilly, Richard Coyle and Helen Baxendale. It later had a production at the American Airlines Theatre on Broadway in 2009. His play Closer, a comedy of sex, dishonesty, and betrayal, opened at the National Theatre in 1997, again directed by Marber. This too won the Evening Standard award for Best Comedy, as well as the Critics' Circle Theatre Awards and Laurence Olivier awards for Best New Play. It has proved to be an international success, having been translated into thirty languages. A screen adaptation, written by Marber, was released in 2004, directed by Mike Nichols and starring Julia Roberts, Jude Law, Natalie Portman, and Clive Owen.

This Souvenir Program is from the Victorian Arts Centre Production 1996

Size 240 x 150 mm  Pictures and information of the cast and show.
Condition: Used Good 8/10
(Please Note scans are low res for fast loading)
Each Order will incur a $5.00 handling fee (including free shipping)
All Prices Shown are in USD (United States of America Dollars)
All Payments by Paypal Just Checkout as GUEST no need to register