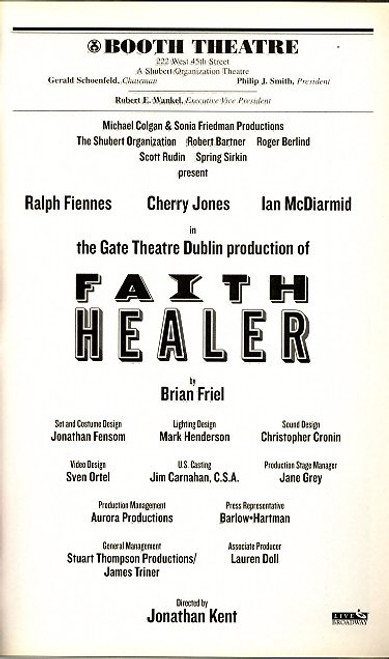 Faith Healer is a play by Brian Friel about the life of faith healer Francis Hardy as monologued through the shifting memories of Hardy, his wife, Grace, and stage manager, Teddy. Faith Healer received its first performance in 1979 on Broadway in a production by José Quintero, with James Mason, Clarissa Kaye and Donal Donnelly. It closed after twenty performances. It was revived in 1983 at the Vineyard Theatre, directed by Dann Florek, with J. T. Walsh, Kathleen Chalfant and Martin Shakar. It was again revived in 1994 at the Long Wharf Theatre under the direction of Joe Dowling and starring Donal McCann, Judy Geeson and Ron Cook. The New York Times called the production "incandescent" and recommended it to "any connoisseur of theater". It was revived again at the Booth Theatre on May 4, 2006. The cast consisted of Ralph Fiennes, Cherry Jones and Ian McDiarmid in a production from the Gate Theatre in Dublin, directed by Jonathan Kent. The Broadway revival received four Tony Award nominations and won one: Best Featured Actor in a Play, Ian McDiarmid.