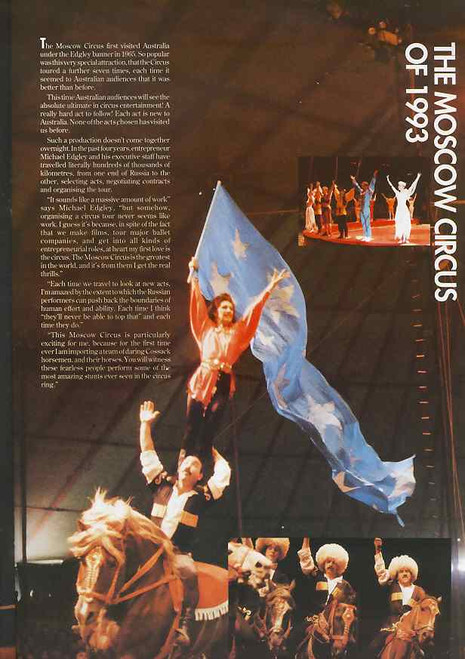 The Russian Circus rose to world acclaim during the Soviet period, when acts from many Russian circuses united to tour the United States under the title, “The Moscow Circus.” During this time, the circus, which was already important became an even more prominent piece of culture, and a point of pride. Russian Circus traditions include clowning, juggling, acrobatics, contortion, and animal acts (especially bear acts, such as bears who juggle with their feet).

Stylistically, the Soviet circuses were different from their Western counterparts. Their acts were more focused on Eastern European culture, and tended to hold more narrative and be more dance oriented than their bespangled, action-packed contemporaries.This narrative style has recently become more popular with shows worldwide, with shows by companies including Cirque Dreams and Cirque Du Soleil.

Size 215 x 320 mm Many beautiful colour plates from the show a must for any collector.
Condition: Good 8/10