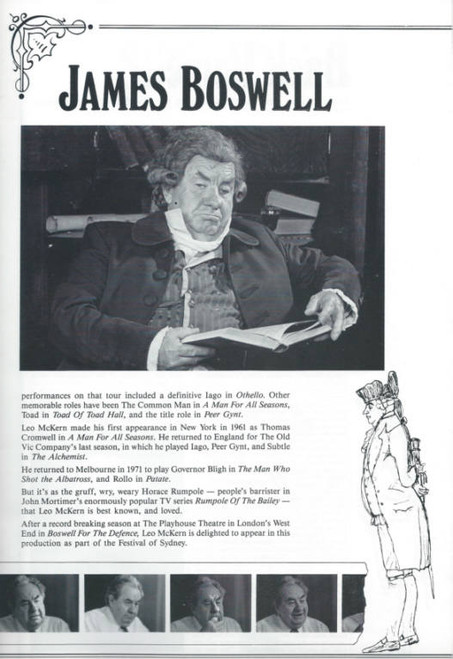 Having fallen in love with actress Jane Holland, McKern moved to the United Kingdom to be with her; they married in 1946. He soon became a regular performer at London's Old Vic theatre and the Shakespeare Memorial Theatre (now the Royal Shakespeare Theatre) in Stratford-upon-Avon, despite the difficulties posed by his glass eye and Australian accent.

McKern's most notable Shakespearean role was as Iago in Othello, in 1952. He originated the role of Common Man in Robert Bolt's A Man for All Seasons in the West End in 1960, but for the show's Broadway production appeared as Thomas Cromwell, 1st Earl of Essex—a role that he would reprise for the 1966 film version. He also portrayed Subtle in Ben Jonson's The Alchemist in 1962. In 1965, he played the eponymous villain in Bolt's The Thwarting of Baron Bolligrew, and Disson in Harold Pinter's Tea Party.

With McKern's name above the title, "Boswell For The Defence" has instant appeal in Australia, the actor's country of origin, and possibly internationally. A West End engagement is planned for later in 1990, and both performance and subject maner should have appeal there.

Patrick Edgeworth has done his research thoroughly, and come up with what is likely an accurate study of the late life and times of James Boswell, the colorful Scottish barrister whose claim to fame was his 1791 biography of Dr. Samuel Johnson, and whose diaries have provided historians witb a vivid picture of late18th century life in England.