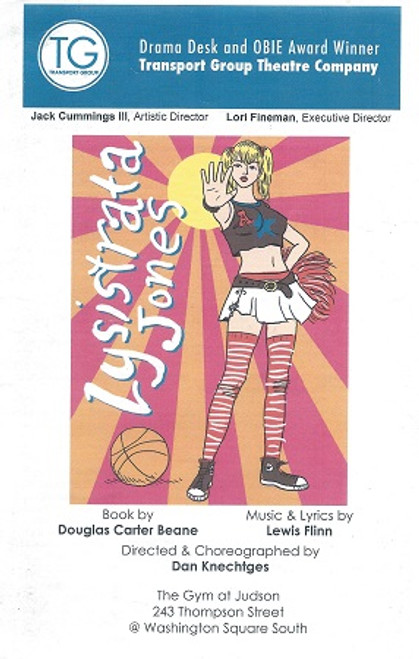 Lysistrata Jones is a musical comedy adaptation of Aristophanes' comedy Lysistrata.[1] The book is by Douglas Carter Beane and the score is by Lewis Flinn. After a critically acclaimed off-Broadway run with Transport Group Theatre Company,the show opened on Broadway in December 2011 and closed in January 2012. The show tells the tale of the men on a losing college basketball team whose cheerleader girlfriends refuse to have sex with them until they win a game.

The musical premiered at the Dallas Theater Center, running from January 15 to February 14, 2010 under the title Give It Up!
It was next produced by Transport Group at the Judson gymnasium in Greenwich Village in May and June 2011. The show began previews on Broadway at the Walter Kerr Theatre on November 12, 2011 and officially opened on December 14, 2011. It was directed and choreographed by Dan Knechtges, with sets by Allen Moyer, costumes by David C. Woolard and Thomas Charles LeGalley and lighting by Michael Gottlieb. The musical closed on January 8, 2012 after 34 previews and 30 regular performances. According to Playbill, "The usually powerful chief critic of the New York Times raved about it downtown and uptown, penning a genuine "money" review for its commercial transfer, but, ultimately, there was not enough box-office interest to support the starless musical."

This Souvenir Brochure is from the 2011 Greenwich Village production

The Mystery of Edwin Drood