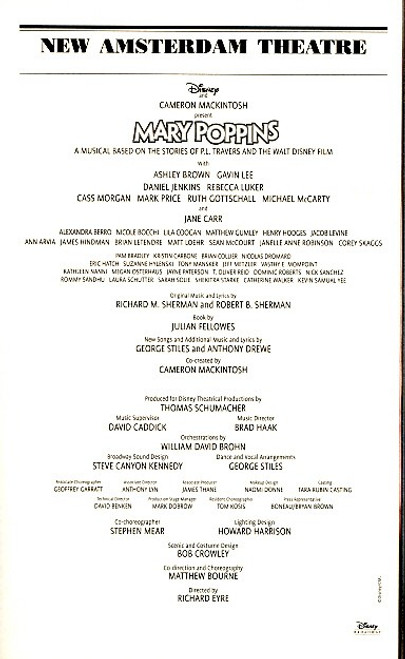 Mary Poppins is a Walt Disney Theatrical musical based on the similarly-titled series of children's books by P. L. Travers and the Disney 1964 film. The West End production opened in December 2004 and received two Olivier Awards, one for Best Actress in a Musical and the other for Best Theatre Choreography. The musical features the film's music and lyrics by the Academy Award winning Sherman Brothers, along with additional music and lyrics by George Stiles and Anthony Drewe. The book was written by Julian Fellowes. The musical was directed by Richard Eyre and co-directed by Matthew Bourne, who also acted as co-choreographer with Stephen Mear. A Broadway production with a near-identical creative team opened in November 2006, with only minor changes from the West End version. It received seven Tony Award nominations, including Best Musical, winning for Tony Award for Best Scenic Design The stage musical is a fusion of various elements from the film and the books. Some elements from the Mary Poppins series of children's books that had been omitted from the film were restored, such as the walking statue and the ladders rising to the stars. Others were removed, such as the scene in which Uncle Albert gets caught on the ceiling, laughing.