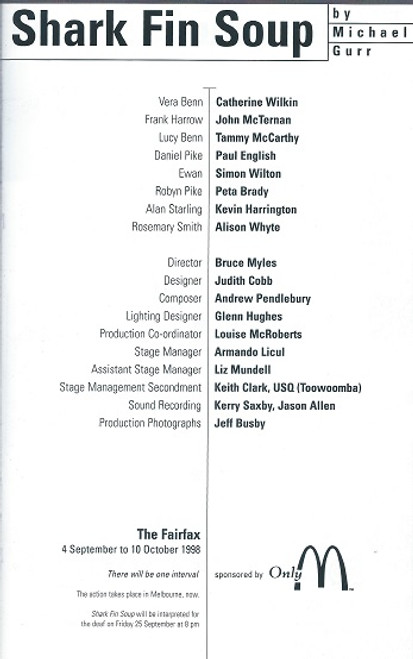 Vera Benn (Catherine Wilkin) is a famous clairvoyant who "sees" people's fates only by touching objects owned by them. She is married to Frank (John McTernan). Her daughter, Lucy (Tammy McCarthy) has abandoned her failed fashion design career to start an innovative restaurant called The Common Dish. Her partners are her ex-engineer and security guard boyfriend, Daniel (Paul English) and their randy chef pal, Ewan (Simon Wilton). The manifesto is, "just soup, bread and no bullshit"

Michael Gurr (29 October 1961 – 2 May 2017) was an Australian playwright, author, speech writer and screenwriter.
Gurr studied at National Theatre Drama School (NTDS) in St Kilda, Victoria, and while there wrote a number of short plays which were sent to Ray Lawler, then Literary Advisor to the Melbourne Theatre Company (MTC). In 1982 Gurr was invited to be Writer in Residence at the MTC and it was there that his first plays were produced. His best-known plays include Crazy Brave and Sex Diary of an Infidel.
He worked as a speechwriter for a number of years for John Brumby and Steve Bracks, both of whom became Labor Premiers of Victoria.