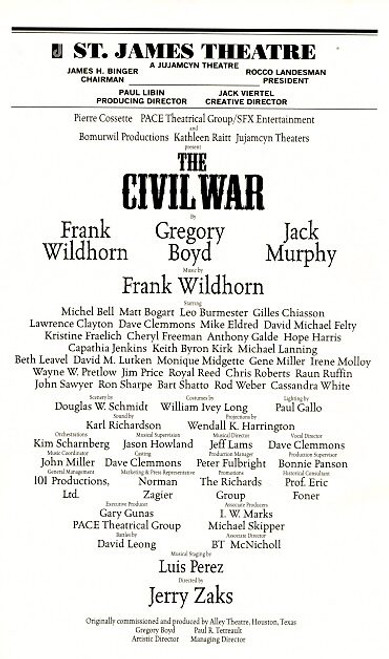 The Civil War is a musical written by Gregory Boyd and Frank Wildhorn, with lyrics by Jack Murphy and music by Wildhorn. The musical centers on the American Civil War, with the musical numbers portraying the war through Union, Confederate, and slave viewpoints. The musical was nominated for a Tony Award for Best Musical. Its styles include Gospel, Folk, Country, Rock, and Rhythm and Blues. A studio cast album was released in 1999 by Atlantic Records, and included Linda Eder, Maya Angelou, James Garner, Hootie & the Blowfish, Travis Tritt, Dr. John, and Betty Buckley. The musical had its world premiere at the Alley Theatre, Houston, Texas, on September 16, 1998, where co-author Boyd is the Artistic Director.The production was supervised by Gregory Boyd, with musical staging by George Faison and staging by Nick Corley. The cast featured Linda Eder (Hanna Hopes), Beth Leavel (Mrs. Lydia Bixby/Violet), Jesse Lenat (Autolycus Fell), Capathia Jenkins (Hope Jackson), Matt Bogart (Pvt. Nathaniel Taylor) and Michael Lanning (Capt. Emmet Lochran). The musical premiered on Broadway at the St. James Theatre on April 22, 1999 and closed on June 13, 1999, running for 61 performances and 35 previews. Directed by Jerry Zaks with musical staging by Luis Perez, the cast featured Leavel as Mabel/Mrs. Bixby, Bogart as Private Sam Taylor, and Leo Burmester as Autolycus Fell.