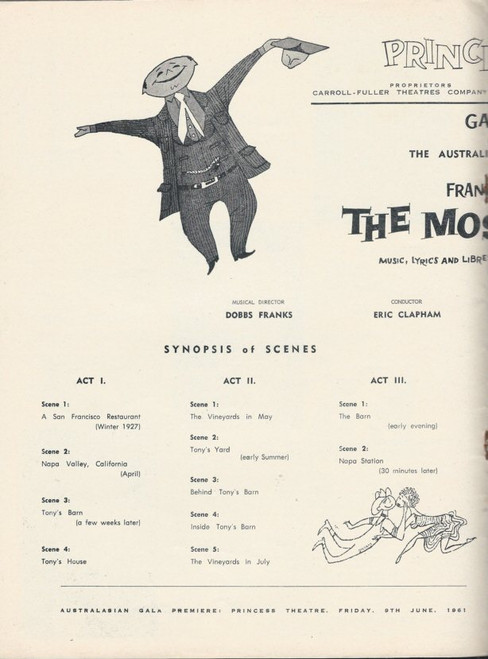 The Most Happy Fella (Musical)

The Most Happy Fella is a 1956 musical with a book, music, and lyrics by Frank Loesser. The story, about a romance between an older man and younger woman, is based on the play They Knew What They Wanted by Sidney Howard. The original Broadway production ran for 14 months and it has enjoyed several revivals, including one staged by the New York City Opera.A friend of Loesser's recommended the Howard play They Knew What They Wanted as material for a musical in 1952. After he read it, he agreed it had musical potential, but decided to omit the political, labor, and religious material. It took him four years to complete the musical.

The Most Happy Fella frequently has been described as an opera, but some have qualified the term. In his book The World of Musical Comedy, Stanley Green noted that the musical is "one of the most ambitiously operatic works ever written for the Broadway theatre.

This Souvenir Brochure is from the 1961 Australian Production at the Princess Theatre  Melbourne.

Size 215 x 280 mm (Soft Cover) Photographs from the show and the Cast a great addition to any show collection.