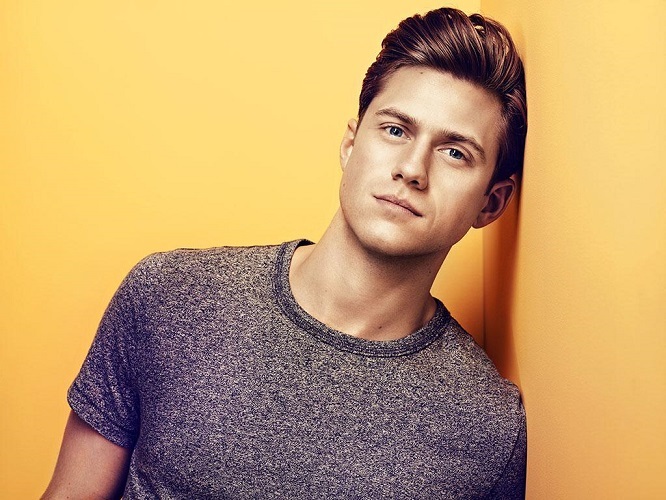 Aaron Kyle Tveit (born October 21, 1983) is an American actor and singer. He is known for originating the roles of Gabe in Next to Normal and Frank Abagnale Jr. in the stage version of Catch Me If You Can on Broadway. He is also known for his recurring role as Tripp van der Bilt on The CW’s teen drama series Gossip Girl, his portrayal of Enjolras in the 2012 film adaptation of Les Misérables, as Mike Warren on the USA Network series Graceland, and as Danny Zuko in Grease Live. Tveit also starred in the CBS series BrainDead as Gareth Ritter.
Tveit is currently originating the lead role of Christian in the stage adaptation of Moulin Rouge! on Broadway. 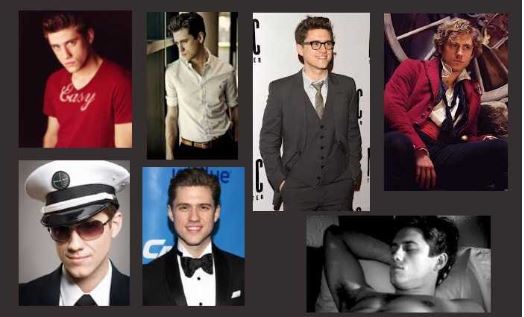 Tveit was born in Middletown, New York. He graduated from Middletown High School in 2001, where he was active both in theater and sports, playing golf, soccer and basketball while also performing in all four of his school’s theater productions. He has a younger brother. He turned down business school scholarships to major in vocal performance at Ithaca College, a decision his parents supported, before switching to musical theater after his freshman year because he missed acting and theater.

Aaron began his professional career in 2003 when he joined the national tour of Rent as Steve and the understudy for Roger/Mark. He was in his second year of studying at Ithaca College at the time; nine years later, in 2012, Tveit completed his college degree, thanks in part to many of his theater roles counting as college credit.

Following Rent, he returned to school briefly only to be cast as Link Larkin in the first national tour of Hairspray. It was in the role of Link Larkin that Tveit made his Broadway debut in 2006. In the following two years, he performed in regional productions including the Barrington Stage Company’s Calvin Berger in July 2007 where he played Matt and as D’Artagnan in a musical adaptation of The Three Musketeers which played at the North Shore Music Theatre from August to September 2007, before returning to the Broadway production of Hairspray for a time. In Fall 2007, Tveit was cast as a young anesthesiologist alongside Ricky Gervais in the 2008 film Ghost Town. 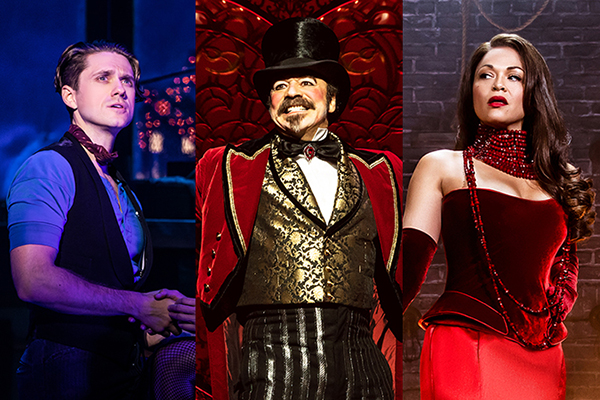 In early 2007, Tveit was cast as Gabe in the Off-Broadway production of the musical Next to Normal, a show that would define the next few years of his career and ultimately bring him acclaim in the theater community. The initial run of the Off-Broadway production ran from January 16 through March 16, 2008, at the Second Stage Theatre. Tveit received a nomination for the Lucille Lortel Award for Outstanding Featured Actor for this role.
In the interim time before the out-of-town production of Next to Normal, Tveit played Dean in the musical version of the film Saved!, which ran for a limited engagement at Playwrights Horizons in June 2008. Also in June 2008, Tveit began performances as Fiyero in Wicked. He left the role in November in order to reprise his role in the Arena Stage production of Next to Normal, for which he was awarded the 2009 Helen Hayes Award for Outstanding Supporting Performer in a Non-Resident Production.
Tveit returned to Wicked in January 2009, leaving once again for the Broadway production of Next to Normal, which began previews in March 2009 and officially opened on April 15. Tveit’s performance as Gabe earned him the Clarence Derwent Award from the Actors’ Equity Association.Tveit landed on AfterElton.com’s list of the “37 Hottest Guys in Theater”.

CATCH ME IF YOU CAN – BROADWAY

Tveit left Next to Normal on June 6, 2009, to prepare for Catch Me If You Can, where he played Frank Abagnale Jr. The musical was performed at the 5th Avenue Theatre in Seattle from July 28 through August 16, 2009. Tveit returned to Next to Normal from September 7 through January 3, 2010. In August, he also starred in the Hollywood Bowl’s production of Rent directed by Neil Patrick Harris, as Roger Davis.He took part in the MCC Theater Miscast Gala in 2009 and 2010.
Tveit played Frank Abagnale Jr in the Broadway production of Catch Me If You Can, opening on April 10, 2011, and closing on September 4, 2011. For this role he was nominated for the Outer Critics Circle Award for Outstanding Actor in a Musical, the Drama League Award for Distinguished Performance, and the Fred Astaire Award for Best Male Dancer on Broadway.

TV AND OTHER SCREEN WORK

During the Broadway production of Next to Normal, Tveit also had a recurring role in the CW series Gossip Girl as Tripp van der Bilt, the cousin of Nate Archibald.
During this period, Tveit appeared in an episode of the television series Ugly Betty titled “All the World’s a Stage” as Zachary Boule, Betty Suarez’s boyfriend. He appeared in Rob Epstein’s Howl, a biopic about the Allen Ginsberg poem and the controversy and trial that ensued after its publication. Tveit played Peter Orlovsky, Ginsberg’s longtime partner, opposite James Franco. He was also a guest star on Law & Order: Special Victims Unit on April 21, 2010 as Jan, an animal-loving yoga instructor who is questioned about the death of his girlfriend, and then again on September 28, 2011 as Stevie Harris, a man with substance abuse issues who accuses his well-respected former basketball coach of sexual abuse.

In 2012, Tveit played Enjolras, leader of the student revolutionary group in the film adaptation of Les Misérables. As the ‘designated Broadway actor’ in a celebrity ensemble cast, this was one Tveit most high-profile roles up to that point. On February 24, 2013, he performed with the cast of Les Misérables at the 85th Academy Awards ceremony. In July 2012, Tveit took part in a private reading for a new musical based on the animated film, Anastasia. He read for the character Dimitri, a con man who brings Anastasia to a wealthy Empress searching for her missing granddaughter, in return for a reward.
The following year, Tveit parlayed his stardom into a starring role in the USA Network series Graceland where he played the undercover FBI Special Agent Mike Warren. The show premiered on June 6, 2013, and ran for thirty-eight episodes before being canceled after the completion of its third season in October 2015.
Between filming seasons of Graceland, Tveit starred in the Menier Chocolate Factory’s production of Sondheim’s Assassins as John Wilkes Booth. The production ran from November 21, 2014, to March 7, 2015. However, he had to leave the production on February 8, due to his working schedule. During this time he also began performing solo concerts and recorded his own album The Radio in My Head as well as the concept album for a new Broadway show An American Victory: A New Musical in January 2014 with Ashley Brown, Hugh Panaro, Ruthie Henshall, Alexander Gemignani, and many other Broadway stars. The cast recording was released more than two years later in April 2016. Additionally, he appeared in the film Big Sky which was released on August 14, 2015 and performed at the first Elsie Fest in New York that September.

GREASE IS THE WORD

Following the end of Graceland, Tveit was cast in a variety of other television and film productions. In 2016, Tveit appeared as Danny Zuko in a live version of Grease that aired on Fox on January 31. He is featured on the soundtrack for Grease Live along with co-stars Julianne Hough and Vanessa Hudgens. He returned to the MCC Theater Miscast Gala in April 2016.[44] Tveit then starred in Undrafted which was released on July 15. His next film Better Off Single was released in theaters and on demand on October 7.

Aaron Tveit performing at the House of Blues Boston in 2016
In October 2015, it was announced that Tveit would star in CBS’s summer series BrainDead opposite Mary Elizabeth Winstead, which premiered on June 13, 2016. Following the cancellation of BrainDead after one season on October 17, 2016, Tveit had time to perform more concerts in 2017 and more screen roles including a reprisal of his role from The Good Wife on an episode of The Good Fight and a starring role in the independent film Created Equal which held screenings in early 2018.
Tveit returned to Barrington Stage Company for their production of Company in the role of Bobby, running from August 10 to September 10, 2017. He next had a role in the Patricia Clarkson-starring thriller Out of Blue, which premiered at the 2018 Toronto International Film Festival.

In November 2017, Tveit participated in a developmental lab for the stage adaptation of the 2001 movie Moulin Rouge!, cast in the role as Christian, the character originally created by Ewan McGregor. In April 2018, it was announced that Tveit would be reprising his role in the premiere engagement of Moulin Rouge! at Boston’s Emerson Colonial Theatre. The musical’s premiere was scheduled for June 27, however delays pushed the start of performances to July 10, 2018. Tveit stars as Christian in the Broadway production of Moulin Rouge! at the Al Hirschfeld Theatre; previews began on June 28, 2019, and the production had its opening night on July 25. Tveit has been universally praised for his portrayal; New York Times theater critic Ben Brantley said that Christian was “a role [Tveit] was born to play” during the Boston run of the show and later said that his ‘passionate and uncompromising’ performance was his “best Broadway work to date”.
Between the Boston and Broadway productions of Moulin Rouge!, Tveit had a recurring role as the aspiring politician Matt Dobbins on the 2019 CBS show The Code.