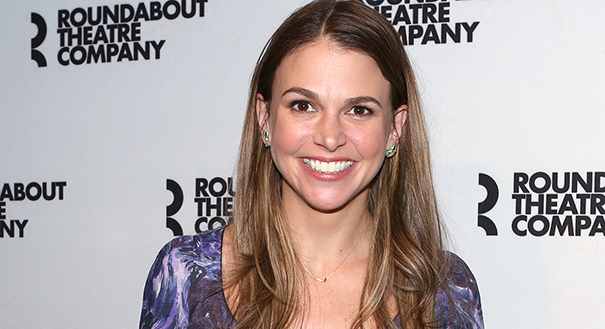 Sutton Lenore Foster (born March 18, 1975) is an American actress, singer, and dancer. Foster is best known for her work on the Broadway stage, for which she has received two Tony Awards, in 2002 for the role of Millie Dillmount in Thoroughly Modern Millie and in 2011 for her performance as Reno Sweeney in Anything Goes. Her other Broadway credits include Little Women, The Drowsy Chaperone, Young Frankenstein and Shrek the Musical. She recently starred in the ABC Family television series Bunheads.

Sutton Foster was born in Statesboro, Georgia, and raised in Troy, Michigan. At age 15, she was a contestant on the television show Star Search and also auditioned for the cast of The Mickey Mouse Club. She left Troy High School before graduating (she received her diploma via correspondence courses) to join the national tour of The Will Rogers Follies directed by Tommy Tune. She then attended Carnegie Mellon University for one year, but left to pursue a theatrical career full-time. In May 2012, she received an honorary doctorate from Ball State University. Her brother is actor Hunter Foster.

Foster’s opportunity was reminiscent of 42nd Street when, during rehearsals of the pre-Broadway run of Thoroughly Modern Millie at the La Jolla Playhouse in San Diego, she replaced leading lady Erin Dilly.[2] Any apprehension about having an unknown playing the lead in a nearly $10 million Broadway production was proven unfounded when she opened at the Marquis Theatre to many positive reviews. The New York Daily News reviewer described her as “newcomer Sutton Foster, who has the pert look, the silver voice and the dazzling legwork to make an extraordinarily winning Millie.”[3] Clive Barnes, reviewing for the New York Post wrote “Newcomer Sutton Foster’s own star turn as Millie is perfectly charming, but as a star she doesn’t twinkle, glitter or light up Broadway like a Christmas tree defying a July noon. But she has a good voice and is cutely agreeable.”[4] The Newsday reviewer wrote: “She has a smile that may remind you of Mary Tyler Moore, the gawky comic precision of the young Carol Burnett, the lyricism of a romantic heroine and a smallish but vibrant voice as accurate as it is expressive. As [Millie], another of New York’s prototypical small-town girls with big-city dreams, [Sutton Foster] appears unfazed by the burden of a character created onscreen by Julie Andrews. The newcomer takes the big stage with an uninhibited what-the-heck comfort level and the discipline to go with her instincts.”[5] Time Magazine wrote: “she’s [Sutton Foster] got the full package: girlish gawkiness and Broadway brass, the legs and the lungs. Foster is a big reason the show is just about the cutest thing to hit Broadway since Annie’s dimples, with perkily retro songs by Jeanine Tesori and clever staging by director Michael Mayer…”[6] Foster went on to win the 2002 Tony Award for Best Leading Actress in a Musical,[7] the Drama Desk Award for Outstanding Actress in a Musical,[8] and the Outer Critics Circle Award for Outstanding Actress in a Musical for her performance.[9][10]

In 2005, Foster starred as Jo March opposite Maureen McGovern as Marmee in the musical adaptation of the Louisa May Alcott classic Little Women, for which she was nominated for her second Tony Award.[11] She returned to the Marquis Theatre in May 2006 in The Drowsy Chaperone, a spoof of 1920s musicals. She played the role of Janet van de Graaff, a famous Broadway starlet who opts to forgo a stage career in favor of married life. Her performance earned her a third Tony nomination.[12] Foster starred in Mel Brooks’ musical adaptation of his film Young Frankenstein as the Swedish yodeling fraulein Inga from October 2007 to July 2008.[13]

She created the role of Princess Fiona in Shrek the Musical, which opened on Broadway December 14, 2008.[14] For this role Foster won her second Outer Critics Circle Award for Outstanding Actress in a Musical[15] and was nominated for her fourth Tony Award for Best Performance by a Leading Actress in a Musical.[16] She played her final performance on January 3, 2010, when the show closed on Broadway. Foster participated in a reading of a work-in-progress new musical, Bonnie and Clyde: A Folktale, in June 2009. Her brother Hunter is writing the music for this musical.[17]

Foster taught a Spring Semester class at New York University’s Tisch School of the Arts Undergraduate Department of Drama, beginning in January 2010, culminating in a cabaret performance at Joe’s Pub in May and taught a Fall Semester 2010 class also culminating in a performance at Joe’s Pub called Crazy for Gershwin (music directed by Deborah Abramson). She is now on the faculty of NYU’s New Studio on Broadway. She also taught a week long master class session at Ball State University (Muncie, IN) in January 2010.[17] September 2010, she continued her relationship with Ball State University by working with students in the classroom, teaching master class sessions, and performing workshops for students of the Department of Theatre and Dance. In the spring of 2012, she returned to Ball State where Foster spoke at commencement and received an Honorary Doctorate of Fine Arts degree from Ball State University for her continued engagement with Ball State students teaching classes at Ball State, mentoring the interdisciplinary team that wrote the musical “The Circus in Winter” and co-directing the Department of Theatre and Dance’s Spring 2012 production of “The Drowsy Chaperone.” Foster then continued her relationship with Ball State University in October 2012, performing in the staged reading of “The Circus in Winter” at the National Alliance for Musical Theatre’s Festival of New Musicals at New World Stages in New York. [18]

She most recently played Reno Sweeney in the Broadway revival of Anything Goes, which began performances on March 10, 2011 at the Stephen Sondheim Theatre and officially opened on April 7, 2011.[20] For this role Foster won her third Outer Critics Circle Award and second Drama Desk Award and Tony Award for her performance.[21][22][23] Foster played her final performance March 11, 2012, when she was replaced by Stephanie J. Block. Foster left to film her new television series, Bunheads, which premiered on ABC Family on June 11, 2012.[24][25] Sutton stared in the Roundabout Theatre Company production of the musical Violet starting in 2014 on Broadway at the American Airlines Theatre.[26] In 2020 Sutton will join Hugh Jackman, Jefferson Mays in The Music Man Opening September 2020 at the Shubert Theatre.

In 2007, Foster appeared on television in Johnny and the Sprites, a children’s musical puppet show,[27] and in a three-episode story arc on the HBO series Flight of the Conchords.[28] She also guest starred on an episode of Law & Order SVU, which aired on March 3, 2010 opposite comedian Kathy Griffin.[29]

In December 2013, Foster appeared in the film Gravy [31] written and directed by Psych actor James Roday. She plays Kerry, not much else is known about the film or her role except that it is a comedic thriller. Sutton stars in Younger from 2015 – Present, see full list below.

Wish, Foster’s debut solo album, was released on the Ghostlight Records label in February 2009. The songs range from jazz to pop to cabaret to Broadway.[32] In 2010, Foster promoted the album with concert performances in Boston, New York, Chicago, the Orange County Performing Arts Center in Orange County, California, and Washington, D.C.[33]

Foster starred as Nurse Fay Apple in the New York City Center’s Encores! production of Anyone Can Whistle, which played from April 8 to April 11, 2010.[34]

Foster is currently on a concert tour which began on September 7, 2012 in Omaha, Nebraska. She will continue her nationwide tour unti her last stop on May 18, 2013 in Cleveland, Ohio. Foster will be performing both songs from her Broadway career as well as her solo album.

Foster met actor Christian Borle in college,[38] and married him on September 18, 2006. During a radio interview in 2010, it was confirmed that Borle and Foster had gone their separate ways.[39][40] Foster and Borle still remain good friends and continue to support each other’s work.[41][42] In 2010, Foster dated actor Bobby Cannavale.[43] In April 2012, Foster confirmed their split.[44] On September 19, 2013, Foster confirmed that she is engaged to screenwriter, Ted Griffin.[45]