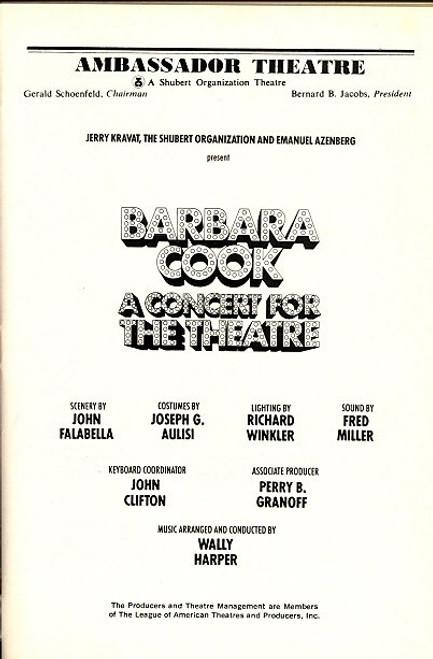 Barbara Cook A Concert For the Theatre" (Apr 1987) Ambassador Theatre

Barbara Cook (born October 25, 1927) is an American singer and actress who first came to prominence in the 1950s after starring in the original Broadway musicals Candide (1956) and The Music Man (1957) among others, winning a Tony Award for the latter. She continued performing mostly in theatre until the mid 1970s, when she began a second career that continues to this day as a cabaret and concert singer. In 1986, Cook was nominated for an Olivier Award for her one-woman show, accompanied by Harper, at London's Albery Theatre. She won a Drama Desk Award in 1987 for her Broadway show A Concert for the Theatre, again with Harper. In October 1991 they appeared as featured artists at the Carnegie Hall Gala Music and Remembrance: A Celebration of Great Musical Partnerships which raised money for the advancement of the performing arts and for AIDS research. In 1994, they performed a critically acclaimed performance at the Sadler's Wells Theatre in London. Alistair Macauley wrote in the Financial Times about the concert, "Barbara Cook is the greatest singer in the world... Ms. Cook is the only popular singer active today who should be taken seriously by lovers of classical music. Has any singer since Callas matched Cook's sense of musical architecture? I doubt it." The performing duo traveled all over the world giving concerts together including a number of times at the White House - for Presidents Carter, Reagan, Bush, and Clinton.

Barbara Cook "A Concert For the Theatre" (Apr 1987) Ambassador Theatre