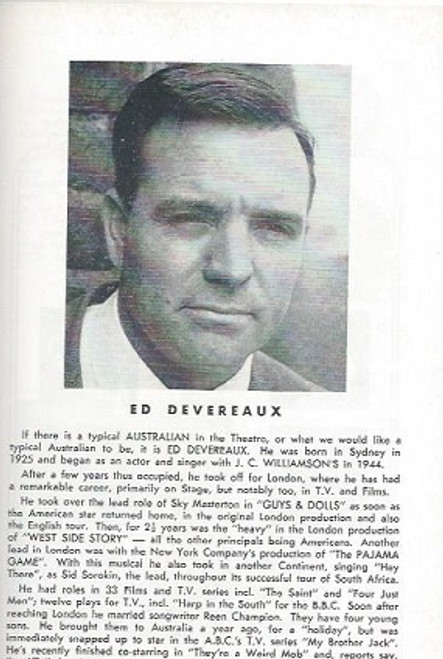 One of the first few Australian plays JC Williams produced, others include “The Firm” and “Pommy”, “The Multi Coloured Umbrella “and “Who’ll Come A-Waltzing” and of course “The Sentimental Bloke”  which ran for 154 performances 1961-62.

Desire of the Moth, was about a sheep farming family in New South Wales and starred Googie Withers, Ed Devereaux   unfortunately not one of JC Williams Hits.

James Brazill Author originally came from Scotland, His early life he spend at sea with P&O including Rawalpindi and during the war the ship was sunk by enemy action after he left, he wanted to write, even before he joined his next ship. He started to write the ships newspaper, and ended up producing it singlehanded. He made several voyages to Australia in another ship called Strathaird. He felt the allure of Sydney and Decided to settle here, But the war came and his wish was deferred for nine years, He became a sea gunner on a number of navy ships, he wrote a story of the grim pounding of a convoy he was in, in mid Atlantic and some verse and sold it, as a full page feature to a Canadian paper. He served two years in the Persian gulf and eventually reached Australia in the late 1940′s and worked on a Queensland station, fencing, ringbarking and gold mining, This gave he the experience to write his play Desire of the Moth.